Clubbing with James Paul McCartney
What better way to Rock out the Century?

Imagine descending the circular staircase, the anticipation. Imagine the bodyheat from the crush of the crowd. Imagine standing shoulder to shoulder as being one of 75 incredible winners of a pair of tickets to the concert of the millennium, of a lifetime.

James Paul McCartney returned to perform at the Cavern Club in Liverpool on December 14, 1999, to end the last century where his musical career began. As a gesture to the millions of Beatles fans around the world that could not possibly fit down inside the Cavern Club, McCartney's millennium gig was cybercast live over the Internet.

McCartney commented at his press conference, ''I can't think of a better way than to rock out the end of the century with a rock and roll party at the Cavern''.

So it's hot, it's cramp, as a legend graced the tiny stage at 10 Matthew Street. Sir Paul McCartney was joined by David Gilmour and Mick Green on guitars, Ian Pace on drums, and Pete Wingfield on keyboards. McCartney jammed on the Cavern stage with his classic Beatle Hofner Bass guitar. 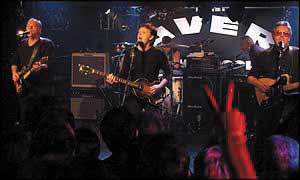 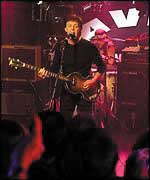 The mighty unit performed a total of 13 songs before an adrenilized crowd of 300. The demand for tickets to this historic gig matched Beatlemania proportions with ticket requests from all over the world. Offers of sex, money, helicopter rides, and other bribes were solicited for a precious ticket to the Cavern Club for this lone McCartney one-off.

Sir Paul had shrewdly orchestrated this appearance as a promotional plug for his 1999 album, Run Devil Run. The performance featured many of the 1950s covers that appear on the disc. The musical surprises were "Fabulous", a c.d. single bonus track from the same sessions, and "Twenty Flight Rock" which was recorded on his 1988 Russian vinyl release, Again In The USSR. This was the song McCartney auditioned with John Lennon to join his band, The Quarrymen, in July 1957.

The biggest number of the evening was the Beatles classic that opens side one of their first album, "I Saw Her Standing There". The audience went completely wild when Macca and the band launched into this classic Beatles rocker. The other McCartney originals performed live were "What It Is" and "Try Not To Cry" included on the disc. 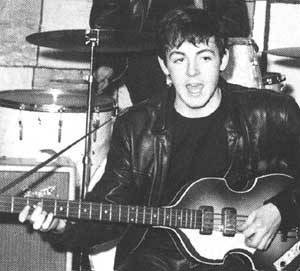 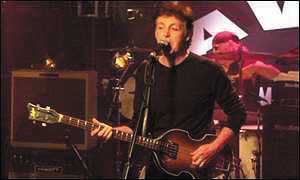 Brian Epstein had discovered the Beatles during one of their afternoon performances in the Cavern cellar in November 1961. John Lennon, Paul McCartney, George Harrison, and Pete Best as the Beatles made their debut at the Cavern Club in March of 1961. After 280 performances on the small cellar stage, the Beatles delivered their last appearance with drummer Ringo Starr on August 3, 1963. 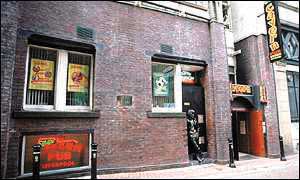 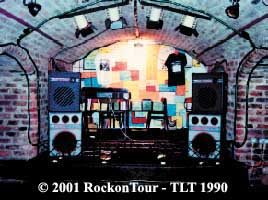 Granada Television captured the Beatles live on stage at the Cavern Club on black and white film during one of their gigs in October of 1962. The Cavern Club was demolished in 1973, buried beneath a parking lot. After John Lennon's assassination, the Liverpool Council excavated the original bricks for sale to charity and rebuilt the Cavern Club as part of an urban renewal project to develop a shopping mall at the site in 1984.

This Cavern Club gig was Macca's 281st performance on the cellar stage. McCartney returned to Liverpool with tour visits by Wings in May 1973, September 1975, and November 1979. His last Liverpool appearance was performing at a charity concert at King's Dock on the Mersey River in June 1990. 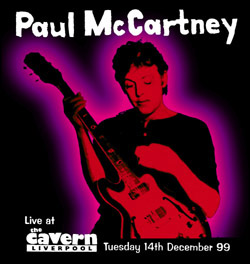 Cavern Club DVD: Honey Hush * Blue Jean Bop * Brown Eyed Handsome Man * Fabulous * What It Is * Lonesome Town * Twenty Flight Rock * No Other Baby * Try Not To Cry * Shake A Hand * All Shook Up * I Saw Her Standing There * Party