Eric Clapton appeared at the Ahoy Sportpaleis in Rotterdam, Nederlands, on Sunday, March 25, 2001. He was on the road promoting his new release Reptile. Slowhand began his performance seated on stage, singing "Key To The Highway" solo with only his acoustic guitar. This intro set the mood for the evening as Clapton's softer sounds dominated the concert material.

Clapton was riding high from releasing Riding With The King in 2000, an album he recorded with Blues legend B.B. King. After completing that project, Clapton set about to record a new solo album. The recent passing of an Uncle motivated Eric in a new direction for his album. Subsequently named Reptile, the nickname refers to the village Ripley where his family is from and in memory of his dear departed Uncle Adrian.

Joining Eric on stage were Andy Fairweather Low on guitar and vocals, Nathan East on bass and vocals, Steve Gadd on drums, David Sancious on keyboards and vocals, and Paulinho Da Costas on percussion. This multitalented unit shifted gears effortlessly on stage among the diverse styles of music in their repertoire, covering R&B to ballads and country blues.

Clapton's concert cannon was ignited by his lead lines and jamming on stage. The focus of this tour appeared to be a mellower stage presentation, featuring heartfelt performances of "Tears In Heaven", "Change The World", and even "Somewhere Over the Rainbow" as the final encore. "Wonderful Tonight" is perhaps, one of the most beautiful ballads he has written and recorded over the course of his four decade career.

The hottest numbers of the evening were his outright rock performances of the AOR staple "Cocaine" (which was a surprise considering the subject matter), the 1970 Derek and the Dominos classic "Layla", and an encore of Cream's 1967 classic "Sunshine Of Your Love". Hearing Slowhand kick it into higher gear on the guitar neck is priceless.

Working the scalpers outside the hall with my friend (His MaJeSty - our Home Hardware Consultant), we obtained four vloer tickets (SRO on the floor) priced around f 90,00 a piece for only f 50,00 each - which worked out to around $23 USD a ticket! What a major score! The vendors sold out of extra large T-shirts early by the time we got inside so I returned the next afternoon to buy two Reptile tour T-shirts.

The floor or field location at European concerts is considered prime territory for a concert position. Unfortunately, Europeans are also known for the addictive smoking habits. The only alternative to standing on the floor was a section of stand seating at the rear of the arena where I parked for most of the evening. My traveling companions, however, reveled in the vloer environment, tagging behind the girl dispensing Heineken from a backpack mini-keg.

This trip to Europe actually was scheduled around a Ray Davies performance at the Beverly Playhouse on March 23; only Ray fell ill and had to postpone. I caught up with my friend and his friends in Amsterdam, traveling Southwest to see Clapton in Rotterdam. This Eric Clapton performance at the Ahoy Sportpaleis is my 25th Euro concert to date.

The 2001 Reptile Tour may be Slowhand's last full scale world wide tour. The guitar ace is not necessarily retiring from stage performances, but it is doubtful whether he will undertake another extensive global tour in the future. Clapton was joined by Buddy Guy for two songs at the Concert for New York City on October 20, granting me another opportunity to enjoy Clapton's live blues guitar work at the Garden for a fourth time. 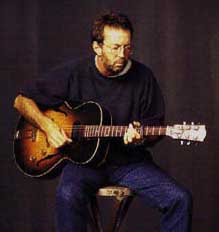