Procol Harum performed at the Birchmere Music Hall in Alexandria, Virginia, on Tuesday, May 6, 2003. Pianist Gary Brooker and organist Matthew Fisher were joined by Mark Brzezicki on drums, Matt Pegg on bass, and Geoff Whitehorn on guitar for The Well's On Fire Tour.

On tour to promote a new album, The Well's On Fire, Procol Harum successfully mixed new material with their established repertoire of music seamlessly. These new compositions were just as entertaining and potent on stage as their tried-and-true back catalogue.

The band simply walked out to audience applause as Whitehorn's guitar intro launched the performance with "The VIP Room" off the new disc. The rhythm section's strong drums and deep bass were complimented by Whitehorn's choice bottleneck guitar solo.

An unanticipated "Repent Walpurgis" slipped into the setlist right before intermission. The waltz-tempo surged in strength with a round of brief solos on guitar, keyboards, and organ. The band really excelled musically on an extended coda that included a brief drum solo.

Their second set commenced with "Simple Sister", a thumping rocker. Whitehorn assaulted his guitar neck to produce a wailing guitar solo, which featured a bass, drums and keyboards interlude at the bridge . The melodic "Shadow Boxed" was a fast-paced rocker, which highlighted Whitehorn's shimmering guitar sound.

Brooker's piano passage introduced "Conquistador", segueing into an intense version with a fierce guitar solo. Fisher's organ-flare spiced up the tempo and earned the band a standing ovation. Brooker was in fine vocal form on "A Salty Dog". Whitehorn's guitar and Brooker's piano romped in unison on the melody for this mellow rocker. The group took a bow together before their stage exit.

The band's encore featured a stellar version of "Whiter Shade Of Pale", which closed the concert on a high note. Fisher's organ intro powered the mellow rocker, supported by the tight rhythm section. Brooker nailed the vocal, and the classic number ended in a crashing crescendo, generating a standing ovation for Procol Harum.

Brooker and Fisher recreated the Procol Harum sound on stage with excellent musicians supporting them on stage. During the stage segues between songs performed, Brooker interjected humorous quips and engaged audience comments from the crowd. 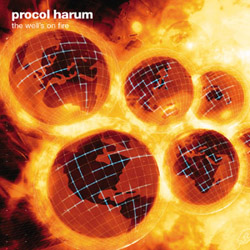