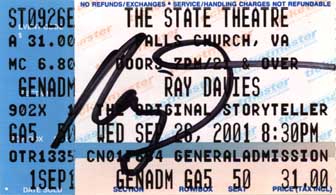 Ray Davies is a modern era vaudevillian. His prolific monologues describe his life, his music, and his story of The Kinks. Davies' presentation is enthusiastic, engaging, and entertaining in delivery. He appeared at the State Theatre in Falls Church, Virginia, on Wednesday, September 26, 2001.

Davies was supported by second guitarist Pete Mathison. He walked on stage carrying a battered suitcase, which contained inside the little black book - his personal accounts comprising X-Ray.

From his first 1964 B-side "I Took My Baby Home" to 1998's "Storyteller", Davies has been composing songs about life, love, and the nature of relationships from his personal perspective. Humor, satire, irony, and isolation are among the emotional themes that weave throughout his musical tales.

Twice, Ray asked a stage hand about where he was performing to the amusement of the audience. "It's great to be here tonight . . . in Falls Church, Virginia". Later he stated, "If you hear me speak, I don't sound like I come from . . . Arlington". His self deprecating humor was surprising.

The front room of his childhood home in Muswell Hill, a London suburb, is the setting for his journey through life. The front parlor is where all of the events in his early years took place. Davies shares these experiences, recounting those memories in verse and song.

Davies toasted a pint of Guinness Stout in memory of his father who was fond of imbibing and entertaining family and friends in the front room. His parents tolerated Ray and Dave rehearsing in the front room, plugged into the little green amp. Dave would later puncture the 8-watt valve amplifier for maximum effect and re-christen it, the fart box.

Davies' oldest sister died at a young age, which had a major impact on him. His personal account of her being laid out in the family front room was touching. Ray performed "See My Friends", which conveyed his feelings of love and loss.

Ray's recollections of composing "You Really Got Me" began with playing a melody on the family piano in the front room. Dave immediately learnt this tune on his guitar. Ray proclaimed, "His sound, my music", was the balance in the chemistry that fashioned the success of The Kinks.

However when it came time to record this song as the third single, Pye Records refused to advance the money to do so with one A&R man stating, "It hasn't got a riff". After maneuvering through many obstacles, The Kinks recorded their signature song, which went on to become a world wide hit single in 1964.

During the actual recording, Ray had worried he had interrupted Dave's concentration on preparing to commence his lead guitar solo. The two brother's glances connected and the message between them was, "Remember the front room, our sisters, the parties, the little green amp". It was as if Dave turned up to 11 and jammed away on his lead guitar solo as his entry into the Rock'n'Roll pantheon of guitar heroes.

Several Kinks classics were showcased; "Stop Your Sobbing", "Tired Of Waiting For You", "Dedicated Follower Of Fashion", and "Victoria". New songs from The Storyteller disc included "London Song", "X-Ray", and "The Ballad Of Julie Finkle". Davies ran back on stage and treated the audience to two encores; "Waterloo Sunset" and "Lola".

The seating capacity was capped at 500, which left many fans scrambling for tickets outside the venue. I was fortunate to snatch up a ticket from a woman who's husband could not make the show. By curtain time, those other fans I had seen searching for tickets had made it into the show as well.

Ray Davies and Dave Davies have both been performing as solo artists since The Kinks began a protracted hiatus in 1996, after playing a few dates in Europe. With The Kinks approaching their 40th anniversary, here's hoping the brothers mount a reunion tour to celebrate this milestone in their careers.

The last Kinks release was To The Bone in 1996, an unplugged collection of many classic Kinks songs. The latest offering of Kinks material came earlier this year with BBC Sessions 1964 - 1977. The double disc set compiles many Kinks favorites as well as the rare "This Strange Effect" from 1965.

Ray Davies composed the soundtrack to Return To Waterloo in 1985; the DVD of this film came out in 1999. His autobiography, X-ray, went to press in 1994, and The Storyteller disc was released in 1998. Waterloo Sunset, a book of short stories, was published in 2000.

Falls Church setlist: This Is Where I Belong * Victoria * 20th Century Man * London Song * That Old Black Magic * Tired Of Waiting For You * Set Me Free * See My Friends * Australia * Autumn Almanac * X-Ray * Stop Your Sobbing * Dedicated Follower Of Fashion * The Ballad Of Julie Finkle * You Really Got Me * Encore: Waterloo Sunset * Lola