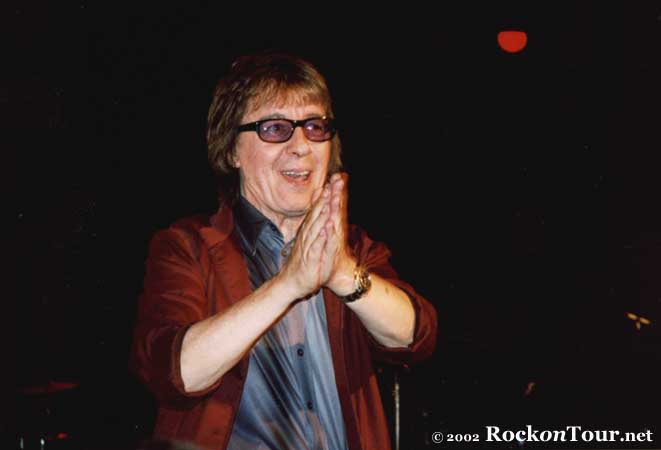 The Rhythm Kings premiere performance in Atlantic City was totally rocking. This multitalented band made its debut in the US on Friday, August 3, at the Trump Marina on the New Jersey shoreline. Bill Wyman's Breaking Up The House Tour was one of the hottest concerts of the 2001 summer season.

One of two Wyman-Taylor originals performed by the band, "Jitterbug Boogie", recalls the early sound of rock'n'roll. Beverley was outstanding on "I Put A Spell On You". Horn player Nick Payn delivered a humorous harmonica outro on "Mystery Train". The band only played one song from their new double disc set Double Bill, "Breaking Up The House", sung by Gary Brooker.

"Tear It Up" featured dueling guitar work by Albert Lee and Martin Taylor. For a grand finish, Taylor got behind Lee, and they both jammed away on Lee's guitar! The band played the 1976 Stones number "Melody", which was moody and bluesy. Wyman was teased for his smoking habit a few times. And Bill has acute hearing, catching things being mumbled among the crowd.

The first encore was "Georgia On My Mind" featuring Georgie Fame, singing solo with Martin Taylor on electric guitar. Fame and Martin were flawless. The second Wyman-Taylor composition, "Hole In The Wall", is a runaway rocker sung by Gary Brooker. Bill Wyman opted once again not to sing vocals on this tour.

At a center table perpendicular to Graham Broad's drumkit on stage, I found an empty seat literally front and center. Bill played bass slightly left of the center microphone. Hands down, it was the best seat in the house, and a major thanks goes out to Stones Doug. Wyman's last appearance in the U.S. was on stage at the A.C. Convention Center with the Rolling Stones on December 20, 1989 - I attended that last concert on the North American Steel Wheels Tour.

I caught the Rhythm Kings twice on their 1998 Fall European Tour during October at the Paradiso Club in Amsterdam and at Le Bataclan in Paris. While departing Le Bataclan, I got to meet Bill ever so briefly. Consequently, I was invited to stop back stage after the Anvil June 1999 concert in Basingstoke. My friend, Randy, from Vancouver wondered off and missed out on the opportunity to meet Bill.

Once again, I was granted backstage entry after the Atlantic City appearance and had the pleasure of chatting with Bill. Wyman is so totally unassuming - very cool and gracious. We talked about all kinds of topics, and he kindly autographed my ticket stub. Both 'Bootleg Kings' live discs were available for purchase at the gigs. If you don't have either, my recommendation is to buy both.