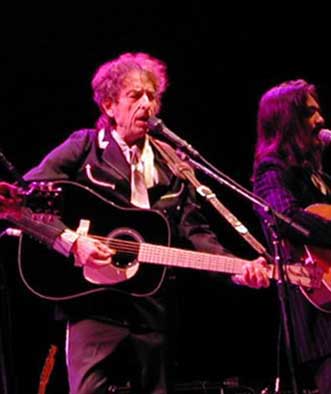 Over a 35+ year career, Bob Dylan has proven himself to be the master of reinvention, with many incarnations from his coffeehouse-protest-singer phase to the born-again Christian phase. His November 15 concert at the MCI Center in Washington, D.C., showed the Dylan of today, a fully evolved performer containing elements of many of his previous musical experiments.

Dylan may have turned 60 this year, but he is still going as strong as ever, and on November 15, proved himself eternal, "forever young" in his reach, still reaching college-age fans and aging baby boomers alike. With Dylan, a concertgoer never knows what they are going to get; I have left some Dylan shows convinced that I would never spend money to see him again. Other shows, like the one on November 15, remind me of what a gem he truly is, a national treasure.

In a solid rock'n'roll show that needed no special effects, no gimmicks to be entertaining, Dylan reminded the 17,000+ arena crowd why he is the first rock musician to receive Kennedy Center honors. He played a substantial two hour, 22-song set with numbers ranging from "Blowin' in the Wind", from his protest singer days, to "Mississippi" from his latest release, Love and Theft. From the moment the band took the stage at 7:54 p.m. to the tune of the Bonanza theme (Dylan needs no opening act to get the crowd in the mood), the "Greatest Band in the Land" had the crowd enraptured, hanging onto every note.

An acoustic version of "Wait For the Light to Shine" kicked off the show, Larry Campbell particularly standing out on mandolin, and set the tone for the entire exquisite evening. In total, the audience was treated to six songs from Love and Theft; two non-Dylan compositions "Light" and "Searching for a Soldier's Grave"; standard versions of some old standbys "Girl of the North Country", "A Hard Rain's A-Gonna Fall", "Tangled Up In Blue", "Just Like a Woman", "Like a Rolling Stone"; a haunting rendition of "John Brown", and an overall beautiful concert-going experience.

They changed instruments like a woman changes shoes. Upright bass, electric bass, acoustic bass, acoustic and electric guitars, pedal steel, banjo, mandolin, harmonica - this broad repertoire of instruments created an eclectic show of tunes containing elements of western swing, rockabilly, southern rock, classic rock, folk and country - but this versatility made the show very Dylanesque, as it was a microcosm of his entire career.

Mellow and comfortable are the two words to best describe the concert. The band was in a good groove throughout the entire performance. Incense burned on the stage constantly. People were dancing, but mellow. The first song to really bring the crowd to their feet was "Just Like a Woman", about one-third of the way through the show, featuring Dylan on harp. The next big crowd-pleaser occurred about halfway through the show with "Tangled Up in Blue".

Another tune featuring Bob on acoustic guitar and harp, there were loud audience cheers with every chorus. While this is one of my personal favorites, the version performed on November 15 was a solid one, but pretty standard for Bob. Eventually, Dylan brought out his harp a total of three times during the show; it came out again on a rocking version of "The Wicked Messenger".

All throughout the show, I could not help but compare Bob Dylan's performance with the last concert I saw at the MCI Center in August. I am almost ashamed to admit that that concert was Madonna. Her concert and Bob's concert were like night and day. While Madonna relied on big-scale theatrics, choreographed dancers and acrobatics to carry her music to create "the show", Dylan's music was the show. The bare-bones stage with no more special effects than a few changes in spotlight color was just enough; anything more would have upstaged the music.

While Madonna thrives on being the diva and adoration from her fans, Dylan seemed most comfortable when playing and singing. He never interacted with the audience, not even to say "thank you" in between songs. A bouquet of yellow carnations thrown up onto the stage floor during "Tangled Up in Blue" remained there throughout the rest of the show.

While Madonna changed her costumes six times during her show, Bob was happy to wear a basic understated outfit consisting of one of his many black suits, white shirt and black boots with white flames throughout his entire performance. In short, while Madonna relied on the gimmicks, Dylan needed no more than pure substance to make his show great. During the many ovations given to Bob, he just stood there and occasionally bowed. I found myself wondering, does this man realize how he has touched generations of people for almost 40 years?

During "Rainy Day Women #12 & 35", I was reminded just how diverse a fan base Dylan actually has. With the spotlight on the crowd throughout the song, I could see the mosaic of Dylan fans. There were baby boomers, neo-hippies, business suits, khaki-and-docker fans, stereotypical groupie-like women, and even a group of college students moshing on the floor. Never did I think I would see moshing at a Dylan show.

I also saw a middle-aged woman standing a few rows in front of me hugging her elementary school-aged son, who was standing on his chair; and they were swaying back and forth in time to the music. This was particularly touching, and reminded me that good music touches people of all ages, shapes and sizes. It was during this song that the band was introduced, and Bob introduced drummer David as the "meanest drummer in the world."

Bob was truly in fine voice throughout the entire show, from the first lovely note. He was on top of his game vocally, and treated his fans to many guitar leads, somewhat rare for him. While he was vocally superb, he let his songs do the talking - and they reminded the crowd loud and clear what a musical genius the man really is.

The Oscar-winning "Times Have Changed" kicked off the encore, followed by a standard but not particularly noteworthy "Like A Rolling Stone." A truly divine acoustic version of "Forever Young" was next, featuring terrific harmonies. "Honest With Me", "Blowin' in the Wind", and a searing "All Along the Watchtower" (featuring great leads by Charlie Sexton) rounded out the show.

Bob Dylan is a music icon, a preeminent poet, lyricist and songwriter of his time. He has often been ahead of his time throughout his career. Shows like November 15 remind us why.

Special Thanks to Marc Salit