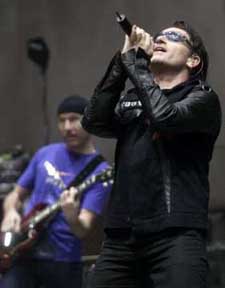 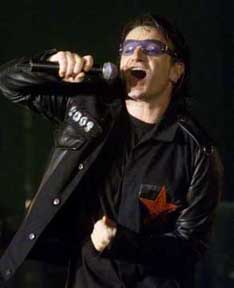 The tragic events of September 11 have changed every facet of our lives, including music and entertainment. If any music act is well equipped to address the terrorist attacks and what they mean to us as a society, it is Bono, the Edge, Adam Clayton and Larry Mullen, Jr. - otherwise known as U2.

For almost two decades now, U2 have been making records and making money (and large quantities of both), but at the same time showing that it is okay for music to have a conscience. It is a no-brainer that U2 would have incorporated something into their show to address the events of September 11, and provoke thought among the audience, while at the same time providing a solid rock and roll show; and U2 did not disappoint at the Baltimore Arena on October 19.

I had already been to two shows on the Elevation tour - Pittsburgh, PA on May 6 and Washington, DC on June 15. In Pittsburgh, I had a fabulous vantage point from which to enjoy the show - the point of the heart-shaped stage, where several fan interactions as well as the band introductions took place less than five feet away from me. In Washington, I was stuck up in section 410, a radically different vantage point from which I was able to appreciate the panoramic view of the lighting and other effects of the show that I had missed from the floor. In Baltimore, I was about 8:00 from the stage, at the bottom of the second level, a very good seat.

When I arrived and saw the heart-shaped stage and four video screens, one to display images of each band member, that I had seen twice before, I thought of the pre-September 11 shows I had enjoyed, and wished I could turn back the clock to that simpler time, just a few short months but a lifetime ago. I almost wished for a carbon copy show of those I had seen before (something I rarely wish for) if it could have meant that September was just a dream. On a deeper level, however, I knew that this show would be very different from those I had seen in the summer, and that it would have a profound effect on all of us for the two hours that we would experience it.

After a terrific opening act by Graham Parker (who played later that evening at Fletcher's in Fells Point) and a brief intro of the Beatles' "All You Need is Love" and "Sergeant Pepper's Lonely Hearts Club Band," the boys from Dublin took the stage at 8:50 p.m. When Bono announced that they "wouldn't want to be anywhere else," the audience went wild. We were ready for two hours of U2-style escapism - the kind where we would be rocking and rolling but we would be reminded of exactly what is going on outside our arena cocoon, so we wouldn't be escaping at all. The band launched into "Elevation," a perfect opener to get everybody going and in the mood.

During "New Year's Day," a definite crowd-pleaser, the audience began to feel extremely patriotic, a mood that carried throughout the show, when Bono, situated at the heart¹s tip, took a US flag from someone in the audience and ran the perimeter of the stage with it, reminding me of a young Mick Jagger. We were also treated to U2's first US single, "Out of Control," from the Boy album, during which the band introductions took place. Following a poignant pair of new songs, "Stuck in a Moment," and "Kite," the latter of which featuring Bono on acoustic, Bono announced that his father-in-law was in the audience, to everyone's delight.

One highlight of the show was definitely not September 11-related. At the previous shows I had seen, Bono had brought lucky audience members onto the stage for a brief moment in the spotlight. In Baltimore, the winner was a guy who not only got to go on the stage, but a roadie strapped an acoustic guitar on him, Edge showed him a few chords, and he jammed with the band on a rendition of Dylan's classic "Knocking on Heaven's Door" (one of my all-time favorite songs). The guy must have known the basics of guitar because he played with such confidence and seemed to change chords quite proficiently after only a few minutes of hasty Edge instruction.

They also thrust a microphone in his face and he sang a few choruses with the band. The other 13,000 of us in the arena were suitably jealous - isn't this what we all dream of, the opportunity to be called up on stage to perform with our favorite band? It reminded me vaguely of the movie "Rock Star" that was out earlier this year and based on the Judas Priest story. The only unlucky part of the guy's 15 minutes of fame was that he was forced to exit the stage through the back rather than reclaiming his excellent spot on the floor, which was general admission and he probably never made his way back there to enjoy the rest of the show, and it was only about halfway through at that point.

The end of the first set was an emotional version of "Pride," which featured video of MLK delivering his famous Promised Land speech, delivered the night before he was killed in 1968. Watching video of that speech always gives me goose bumps because MLK's words seem so prophetic, given the fate he met the day after delivering the speech. Given that it is now 33 years later and we have progressed so much as a society, yet in so many ways we have not advanced at all, which was evidenced on such a mammoth scale on September 11, the video held special significance.

A five-song encore followed, and this is where, in many respects, the meat of the show could be found. Each song seemed to resonate and remind me of U2's power to capture the essence of a moment, feeling or sentiment. "Bullet the Blue Sky" kicked off the encore, followed by a decent cover of Marvin Gaye's "What's Goin' On?", Motown's foray into activist music. "New York" from the new album was next. I had been waiting for "New York."

Even before September 11, it was my favorite song from the current album, and it has a greater meaning now, not just for me but also for everyone in all likelihood. I knew it would be performed, as it had been at the previous shows, and I knew that something special, a tribute to the New Yorkers and the spirit currently encapsulating them, had to be in the works.

Bono seemed particularly emotional during "New York." Rather than singing the written lyrics, "Just got a place in New York," Bono continually sang, "I Love New York," which was greeted by roars from the audience every time. When he substituted that with "Baltimore loves New York" everyone went wild. When Bono took off his black leather jacket to reveal a US flag in the interior lining, the crowd began chanting "USA."

Bono then adopted the posture that made everyone know he was about to give us his thoughts on everything that has happened, as only Bono can do, so everyone quieted down to listen. He started off by saying that the band was "deeply humbled and honored to be on tour in the US at this time."

He compared what is happening now to Arab-Americans to being Irish in the 1970s and 1980s, and what happened to him, his friends and his family when as Irish, they traveled to England and experienced discrimination and violence at the hands of the British because of the actions of "other fundamental lunatics," the Irish Republican Army. He went on to remind everyone that just as the IRA was not representative of all the Irish people, Arab-Americans should not be held responsible for the actions of the perpetrators of the terrorist attacks. He also said that the Koran was a beautiful book and that Islamic people were beautiful, and we all should strive to find the beauty in them.

"One" was next, a huge crowd-pleaser. This rendition of "One" was, without question, the most emotional of all the versions I had heard on the tour. During "One", the video monitors scrolled the names of all of the crew and passengers aboard the doomed jetliners on September 11 - American Airlines 11, United Airlines 175, American Airlines 77, and United Airlines 93. The scrolling of the names from United 93 continued past the end of the song, and led into the next song, which was, appropriately, "Peace on Earth." "Walk On" rounded out the show, an appropriate closer, as the message was undoubtedly that we are living in difficult times, but we have to take what we can from it and move on - the lessons we must remember to make our lives and our world better.

Music has been good therapy for me as I have coped with the events of the past month and a half, as it has been for most people. I have been to three or four concerts since September 11, and each of them has treated the events differently, from saying and doing completely nothing on one end of the spectrum to dealing with it as explicitly as U2 did. U2's Baltimore show on October 19 was so effective in getting everyone to feel good about themselves and about life for a few hours, as music is supposed to do. Singing and dancing made everyone feel so joyful, but this show did not allow us to forget, as good therapy should not. 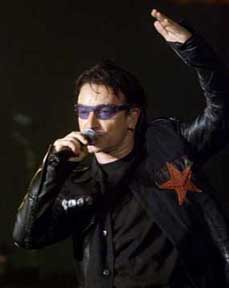 Baltimore setlist: Elevation * Beautiful Day * Until the End of the World * New Year's Day * Out of Control * Sunday Bloody Sunday * When Will I See You Again > Stuck In a Moment * Kite * Angel of Harlem (full band-electric) * Knockin' On Heaven's Door (full band) * Staring at the Sun (acoustic) * Please > Where the Streets Have No Name * I Still Haven't Found What I'm Looking For * Pride * Encore: Bullet the Blue Sky * What's Going On * New York * One * Peace On Earth > Walk On