U2 strikes a chord for Liberty
An unforgettable performance in Pennsylvania 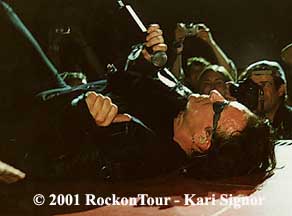 For any music maniac, and no doubt for the diehard U2 crowd that follows the band, U2's Elevation Tour 2001 is unlike any other live concert. This time around U2 have allowed their fans a rare and unique opportunity to share the experience within a hand's reach, literally. General admission tickets are those most sought after, and a spot on the floor, the best in the house. The stage thrusts itself right into the audience with a heart-shaped catwalk and encloses a few hundred fans who were determined enough to be among the first in line before the venue doors opened. Other floor ticket-holders skirt the outside of the heart and no doubt have an unforgettable peek at the band for two hours.

Of course, I was one of those maniacs on Friday, November 2, up before dawn to leave Baltimore with my sister in time enough to secure our spot in line outside the First Union Center in Philadelphia by 7 a.m. Numbers 146 and 147! Sleeping bags, lawn chairs and card games cluttered the sidewalk. The next 12 hours in line waiting, although long, were entertaining and no question, worth it! We met some incredible people and swopped stories in line. There is something indescribable that all U2 fans share and understand about each other and their passion for this group. It is this that makes for the most amazing time ever at a U2 performance.

As the hour neared, we were full of excitement and angst. By 5 p.m., the fans who had, earlier, wrapped around two sides of the arena, blaring live U2 shows from previous show dates during the tour all afternoon, were now on their feet and huddled in a compressed line. Finally, the venue doors opened, and our wrists were slapped with a special band for floor entrance, and those early enough and wishing to enter the heart were slapped with a second one inside its walls. My sister and I rushed the floor. We were early enough to get inside the heart, but with some hesitation we decided to try our luck elsewhere and secured a spot directly against the railing, outside the heart, a mere few feet from the catwalk's tip. It was going to be tremendous, what a spot!

Opening act: Stereophonics. This was my first experience with the British band, but I loved it. The music was much like that of Oasis, although a little more stylish and rock'n'roll. After their set, lights went up, and again we stood, waiting through a handful of Beatles classics. Finally, under the raw and fully illuminated lights from above, Larry, Adam, Edge and Bono casually emerged and launched into "Elevation". Every body was thrust up off the floor and energy rocked the room. Only well into this first song were the lights finally dimmed. An amazing opening, and the band then went into "Beautiful Day". The sound of this new album, All That You Can¹t Leave Behind, was all too familiar to everyone in attendance. The energy exuded on stage by Bono and the boys, and their music, is something that can only be felt in a setting as intimate as this. 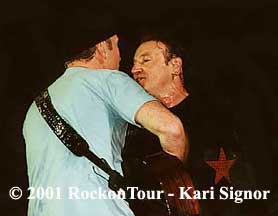 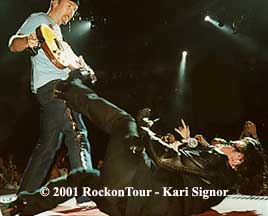 One of the most thrilling moments occurred during "Until the End of the World" as Bono and Edge both strolled out to the crowd around the curve of the heart. They broke into a duel during the final chords, with Bono dramatically falling to the stage two feet in front of us, kicking at Edge's strings in synchrony with Larry's beat. A thrilling performance and experience for those of us close enough for a telephoto-like view, and it only left us all shouting for more.

The heart of the show was filled with the raw patriotism of U2 classics, including "New Year's Day", "Sunday Bloody Sunday", "Bullet the Blue Sky", and "Pride (In the Name of Love)"; old songs which now had new meaning. Early in the show, Bono proclaimed that they were deeply humbled and privileged to be touring in the U.S. at this time. Another stunning moment came when the band burst into their first-ever single, "Out of Control", with Bono introducing the song just as he had done to the record labels 20 years back. "Kite", a ballad originally written by Bono as advice for his children, was tonight introduced by Bono as a tribute to his father (who recently passed away), saying that the lyrics of the song could've been his own father giving advice to himvery full of emotion.

Bono and Edge again met later at the tip of the heart in two emotional acoustic duets of "Wild Honey" and "Please", both of which had the crowd reeling. Repeatedly Edge was invited to share the mic and vocals with Bono, which resulted in playful grins and chuckles between the two. It is this type of interaction between the band members that reveals their love & passion for what they do, and their strong friendship & respect for each other. The energy of the crowd was unmatched during Edge's opening guitar riffs of "Where the Streets Have No Name", while Bono ran a lap and a half around the length of the stage, around the heart. At this moment the arena was blinded with white lights as the band charged into the first chords.

The band satisfied the crowd with two encores. During "Bullet the Blue Sky", Bono armed himself with a spotlight, shooting the crowd with bursts of light as he strolled around the stage. As a gesture to our nation and the events of September 11, he flashed the lining of this black leather jacket which bore the pattern of the American flag. Perhaps his most gracious moment was when he stood directly in front of us, knelt down, and with outstretched arms grabbed an American flag from the fan next to me on my right.

Bono took the flag and gently cradled it in his arms, as its length flowed to the floor, almost in memorial to the victims, then graciously handed it back. It was very moving. It is this type of intimacy with their audience that U2 warrant the unyielding devotion from their fans. Of course, during this extended leg of the tour, "New York" rocked all the more and at one point, a theatrical Bono paused for a moment at the edge of the catwalk, posing as the statue of Liberty.

As the evening came to a close, U2 rolled into a live-favorite, "One". Just as in other moments throughout the evening, separate television screens, stretching the length of the stage behind Larry and his drums, rose up from behind the stage. This time, though, the screens were not flashing bright imagery; instead they projected names. Behind the band scrolled the names of every crew-member and passenger of the four airline flights of September 11th, as well as the names of all those lost from the New York Police and Fire Departments. 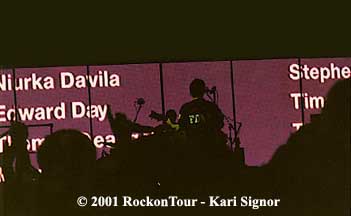 As Bono sang, he was clad in an FDNY T-shirt, and instead of using the catwalk to keep himself in the limelight (as we all love him to do), he humbly joined the band on the back of the stage for the entire song, devoting all the attention to the names on the screen. It was very moving, and brought many to tears. This kind of genuine decency that emanates from U2 is why they are so loved by their fans. It was without a doubt the most emotional part of the performance and as the band closed with "Walk On", fans were left with memories of a night they will forever cherish.

I have seen U2 live six times to date, although I am old enough to have experienced only the two most recent tours, including Elevation. But for every die hard U2 fan out there who is moved and elevated by this band like they are by no other, such a tour and night is truly a soulful and historical experience, if not spiritual. U2 has attracted a following like no other. The intimacy, passion, and charisma which they bring to fans' fingertips I fear, will never be matched again. I am catching this this tour two last times in Atlanta and Miami. The final show on December 2, 2001, in Miami promises to be an unforgettable one.

Philadelphia setlist: Elevation * Beautiful Day * Until the End of the World * New Year's Day * Out of Control * Sunday Bloody Sunday * Stuck In a Moment * Kite * Wild Honey (acoustic) * Please (acoustic) * Bad > 40 * Where the Streets Have No Name * I Still Haven't Found What I'm Looking For * Pride * Encore: Bullet the Blue Sky > What's Going On * New York * One > Peace on Earth > Walk On