Left For Live Deluxe is a tremendous artifact, documenting the professionalism and power of the late John Entwistle on electric bass guitar. This double deluxe disc captures the prolific bass runs of lost Who bass guitarist, The Ox, as he should always be heard, loud and loose live.

An abbreviated version of the John Entwistle Band in concert was originally released in 1999 as Left For Live. This expanded live performance features more tracks with Entwistle on lead vocals. "My Size" is a heavy rocker from his debut solo album Whistle Rhymes. The JEB offers an exciting take of this lost classic.

Entwistle shares vocals with drummer Steve Luongo on "Darker Side Of Night", a new number off Music From Van-Pires, a JEB soundtrack released in 2000. Gordon Cotten's synthesizer gives the track a haunting feel, and Godfrey Townsend rips on his guitar solo.

The JEB tackles "Boris The Spider" with Entwistle adding his deep vocals on the title chorus lyric. The band rocks out on this 1966 Who classic, extending the bridge with a jaunty synth solo. "905" sounds fantastic live with Luongo and Townsend contributing harmony vocals on this intense rocker.

Entwistle jams on "Endless Vacation", another new song. His lyric, "I hope I get old before I die", does not soothe the listener's loss, but acknowledges his droll wit. "Whiskey Man", a track from A Quick One, is the first song he wrote for The Who. The revised rock tempo compliments the humorous subject matter.

The stirring rendition of "Too Late The Hero", a 1981 solo album title , showcases his unrecognized talent for singing a power ballad. "Heaven And Hell" highlights his reputation as a XXX-rocker. Luongo beats the skins fiercely as Entwistle cranks up his bass guitar.

That 1970 Who B-side segued into a surprise reprise of the JEB instrumental "Horror Rock". Entwistle sarcastically dedicated "My Wife", his tour de force from Who's Next, to his two ex-wives. The JEB delivered a blistering stage workout on this Who classic.

The revamped recording includes peculiar in-between song banter by Entwistle and his band mates, providing proof Entwistle had an unusual sense of humor. His comical vignettes comment upon several morbid topics; death by passion, the last song he wrote, his pet spider Doris that died, and cryogenics.

June 27, 2003, is the first anniversary of John Entwistle's untimely passing. An incredible talent was lost in Las Vegas last year. The Who are reported to be releasing a recording of Entwistle's final stage appearance with the band at the Royal Albert Hall from February 2002. Rehearsal footage of The Who from June 2002 constitutes the remaining live material featuring John Entwistle playing bass guitar. 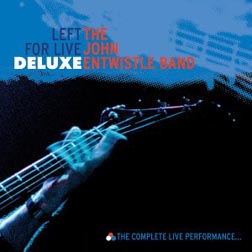