Roag Best, joined by brothers Pete and Rory Best, has detailed the early Beatles timeline in an engaging presentation, The Beatles: The True Beginnings. Resembling a rediscovered time capsule concentrating on their embryonic phase, the Best brothers provide a personal and intimate glimpse into the gestation of the original band.

The Beatles: The True Beginnings, relates in narrative style, the Best family's interaction with three Liverpool lads and their drive to attain international fame. Mona Best harbored the fledgling band in the basement of her home, the Casbah Coffee Club, and became an important figure by guiding the decisions of the young musicians.

Bound as a brilliant table book, the Best brothers present The Beatles story through pictures and prose. Collected historic photographs flash back to the excitement of bygone days and recent snapshots capture objects as they are today. Artifacts, mementos, posters, and tickets are all tiles in the musical mosaic we now know as The Beatles.

The book quotes family, friends, fans, musicians, and associates who were firsthand witnesses. Sir Paul McCartney cites the historic importance of the Casbah Coffee Club in Liverpool, and it's fertile ground empowering The Beatles to hone their musical craft as teenagers before a friendly crowd.

The Quarrymen debuted at the Casbah Coffee Club on August 29, 1959. The group was always suffering in need of a drummer. Having been booked to appear in Hamburg, Pete Best was approached by McCartney to audition on drums for the Silver Beatles in August 1960, becoming the group's first official drummer.

A major bombshell is the revelation that Neil Aspinall, The Beatles road manager in the 1960s, fathered Roag Best. This must have created conflicting feelings for Pete Best, who had been dismissed by manager Brian Epstein in August 1962, with the emerging band on the eve of their impending success with Parlophone Records.

The Beatles: The True Beginnings contributes a large piece in the puzzle of The Beatles humble beginnings in Liverpool. Together, John Lennon and Paul McCartney developed the Merseybeat sound and became Pied Pipers of an international generation. Their timeless music continues to inspire budding musicians and fascinate legions of fans who were born after the group disbanded in 1970.

Pete Best will forever hold an important role in the developmental stages and history of The Beatles. Now 41 years after his departure from the Fab Three, Best continues to attract attention among Beatles fans. Ten tracks featuring him on drums appeared on Anthology 1. Best is currently preparing to launch a 2003 U.S. summer tour. 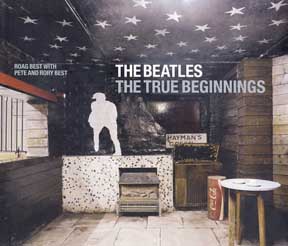