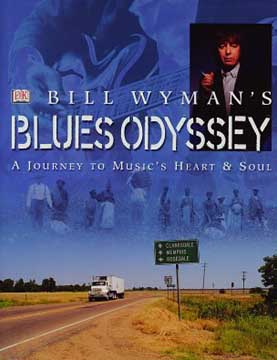 On the immediate heels of completing a summer U.S. tour with his band, The Rhythm Kings, Bill Wyman was out on the road once again promoting his new book, Bill Wyman's Blues Odyssey - A Journey to Music's Heart & Soul, published by Dorling Kindersley. Wyman appeared with fellow co-author Richard Havers at Tower Records in Washington, D.C., on Labor Day 2001.

Wyman has dedicated this new book to Brian Jones and Ian Stewart, the two departed British R&B purists who formed the original nucleus of The Rollin' Stones in 1962. Wyman's participation in this project began as a radio series production that spawned into a television documentary. Because of the time constraints of a two hour program, Wyman then agreed to expand his research on American R&B into an expanded book presentation. A DVD is also anticipated for release after the program has broadcast in November.

Bill Wyman's Blues Odyssey takes the reader back through time to examine the origins of American Rhythm Blues from the arrival of African slaves onto colonial plantations. Their tribal rhythms would form the foundation of this emotional music. Visiting the roots of American R&B from the perspective of Chicago, Memphis, the Mississippi Delta, and Saint Louis, the reader is given an insight to where these unique sounds began in the 20th Century.

Having been bassist for the Rolling Stones has taken Wyman all over the globe. This enviable position has not only allowed him to meet many legendary R&B artists and establish friendships, but to perform with these famous musicians on stage during the course of his 40 year career. This multimedia project has been a labor of love for Bill.

Steve Bush 37 from Chesapeake, Va, when asked why he was in line said, "I bought his new book, and I'd like to get a picture with him". He's been a fan since 1977. Bush serves in the military and saw the Stones in Japan twice during the 1995 Voodoo Lounge Tour after Wyman had left the band. Bush commented, "It looks like a fascinating book. I enjoy reading history, especially history of the blues. I'm anxious to read it actually".

Sisters, Kris Roth 35 from Takoma Park, Md, and Stephanie Roth 31 from Arlington, VA, came to meet Bill. Stephanie visited Wyman's London restaurant Sticky Fingers after the Stones' aborted 1998 U.K. tour, content to hang out at the bar. Kris announced, "I'm a Bill Wyman fan". They went together to see the Rhythm Kings appear at the Birchmere. Kris said she, "thought it was a great show", stating, "we were sitting in the front row". Stephanie added, "We got to shake his hand".

Dileep Wagle 54, said he's been a Stones fan for the last 35 years. Wagle remarked, "I think Bill Wyman is a terrific bass guitarist. The sound of his bass guitar was something which you didn't hear from other bands at the time". His favorite Rhythm Kings disc is Anyway The Wind Blows.

Wagle's very first Rolling Stones concert was their memorial performance for the late Brian Jones in Hyde Park on July 5, 1969. He recalls, "I went there at six in the morning, and the Stones came on at five in the evening; that was Mick Taylor's first concert". Wagle continued, "I remember it vividly because then Brian Jones had just died, and Mick Jagger released all these butterflies, and then they played "Honky Tonk Women" before it was actually released on a single. It was the first time we heard the new song".

Document Records has released Blues Odyssey, a double CD set consisting of 47 original R&B tracks by legendary R&B artists. These songs were personally selected by Bill Wyman for inclusion on the companion disc. These R&B tracks from 1926 through 1951, are merely a sampling of the wealth of historical American Rhythm and Blues recordings. Bill still enjoys listening to his extensive, rare collection of R&B LPs, 45s, and 78s.

Early on as the Stones' career began to rise, Wyman was offered an opportunity to back Bo Diddley with guitarist Brian Jones and drummer Charlie Watts on an October 1963 BBC Radio broadcast. Diddley was so impressed with the British R&B trio, he asked them tour the UK as his new backing band, but they had no choice other than to decline. These historic recordings along with many other Rolling Stones BBC sessions have been uncovered, but no mention has been made if they are ever going to be released to the public as other bands' classic broadcasts on BBC Radio have.

While Wyman was backing Muddy Waters at the June 1974 Montreux Jazz Festival, he was approached by Buddy Guy and Junior Wells to assemble a rhythm section to back them for their scheduled performance. Wyman leapt at the chance, forming the All Stars with Pinetop Perkins, Dallas Taylor, and Terry Taylor. The subsequent album Drinkin' TNT 'N' Smokin' Dynamite was reissued in 1994.

Wyman's autobiography Stone Alone - The Story of a Rock'N'Roll Band was published in 1990. Wyman Shoots Chagall is a limited book/CD project of Bill's released 1998. Wyman was consulted on Blinds & Shutters printed in 1990. The second installment of Wyman's autobiography has been rumored over the past decade. Bill's parting comment was to expect another studio album from the Rhythm Kings in 2002. 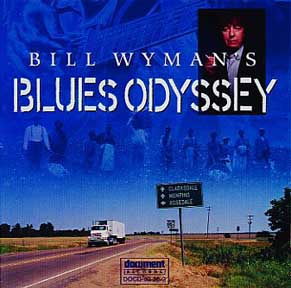 How is the book singing tour going?

BW: Excellent, it gets more and more every time we go. You know, a little place like Oxford we sold 180 books.

How is the promotional tour with the media?

BW: It's good. I thought the band were a bit unfortunate that people didn't know what to expect so we didn't sell as many tickets or didn't sell out in as many places as we thought we might. It's like the first Stones tour; we had the same problem.

Now this is your first book signing tour in America. Do you find any differences on promotion in the United States as opposed to in Europe?

BW: No, they're very enthusiastic, and they're quite large signings I've done. They really are. I think we've done about 150 books. The last three or four have been over 100 books, and some of them have been quite small towns so it's rather nice so it's been worthwhile.

BW: More to come. It's finished, I just got to get Richard into it. Might see something next year once we finish this.