Those bad boys of Boston, Aerosmith, brought their 2002 Girls Of Summer Tour to the Tweeter Center on the Waterfront in Camden, New Jersey, on Saturday, September 7, 2002. Many fans came empty-handed, scouring outside the venue in search of tickets to the sold out performance. Aeroforce members took up camp in the first few front rows.

A curtain brandishing the Aerosmith logo was brought across the stage as the theme song of 007 played over the speakers. All it took was a strobe light and their silhouettes to ignite instant pandemonium. Two sections of fans were corralled in pens on either side of the stage.

The band launched into high power, opening with their 1975 classic, "Toys In The Attic". Steven Tyler leaped up on a monitor at the edge of stage. Tyler belted out, "Camden, New Jersey, I'm so glad you came out tonight to witness this event!"

The band played their latest single, "Girls Of Summer", which sort of reminds one of "Some Girls" by the Rolling Stones. Tom Hamilton played the bass intro to "Sweet Emotion" as Joey Kramer kicked in on drums. Tyler held a huge pair of shakers and Perry chomped on an oral wawa bar to affect the familiar guitar crunch.

Tyler announced, "We're coming out to see ya!", as the band members made their way their the aisle aided by bouncers to reach the B-stage set up at the font of the lawn section. "Chip Away The Stones" During "Dream On", two girls both wearing long boots danced in the aisle. "Big Ten Inch Record", one of their party songs, was the last B-stage treat. Tyler wailed on harmonica.

The group were tight on "Jaded". Tyler exclaimed, "Don't worry, f*ck it, just play it!". The band played a blues-soaked arrangement of "Pink" first, which segued into a rockier version of "Pink" infused with a funk-swagger attitude. Tyler sang face down into the stage floor. "You guys are f*cking crazy", was Perry's compliment to the Camden crowd.

Perry delivered a strong lead vocal on "Stop Messin' Around". Second guitarist Brad Whitford played a rare guitar solo, and Tyler added harmonica. Perry and Whitford jammed together on "Cryin'". The band cranked on this pop-rocker with Tyler kicking his harmonica into the audience after his solo. "Dude Looks Like A Lady" featured great bass work by Hamilton.

Aerosmith welcomed Kid Rock and Run DMC to sing harmony on their final encore, "Walk This Way". "May your ears ring through to the next year till we come back!", was Tyler's parting comment. The audience was a large mix of baby-boomers, generation X-ers, hip-hoppers, groupie-wanna-bees, and plenty of R&R babes.

On another note, a different form of entertainment began even before Aerosmith took the stage. Two women, second row dead center, began kissing each other for one of the media shutterbugs. Their shocking make-out session generated hoots of approval from men and looks of disgust from women seated around them.

Camden setlist: Toys In The Attic * Back In The Saddle * Same Old Song And Dance * Girls Of Summer * Sweet Emotion * What It Takes * Lord Of The Thighs * Chip Away The Stone (B-stage) * Dream On (B-stage) * Big Ten Inch Record (B-stage) * I Don't Want To Miss A Thing * Monkey On My Back * Jaded * Blues Pink Intro/Pink * Stop Messin' Around * Cryin' * Dude Looks Like A Lady * Encore: Draw The Line * Walk This Way (with Kid Rock & Run DMC)

A Galaxy of Girls, Glam & Grunge
Aerosmith does what it does best 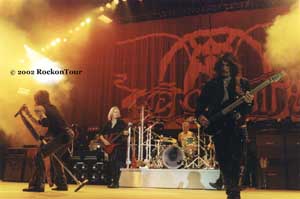