The classic line up of Badfinger was Tom Evans on bass, Mike Gibbins on drums, Pete Ham on guitar, and Joey Molland on guitar. Badfinger began 1970 on top of the world with their international hit single "Come And Get It". The band had been signed to Apple Records as The Iveys in 1968, but their name was changed in committee as an overhaul measure to improve their commercial viability on the charts.

BBC In Concert 1972 - 1973 presents two performances of Badfinger recorded before a live audience at the Paris Theatre in London. Song selections performed at these two concerts for BBC Radio comprise 1970's No Dice, 1972's Straight Up, 1973's Ass, and 1974's Badfinger albums. Also included in this historic artifact is a live version of "Come And Get It", recorded during a performance on Top Of The Pops from 1970.

"Better Days" is a jaunty rocker that opens the first set from June 1972. The tender melody of "We're For The Dark" features gentle phrasing by Molland on guitar. Two Dave Mason covers are presented in this collection of concert material. A gruffy vocal delivered on "Only You And I Know". The band shuffles on a funky blues version of "Feelin' Alright".

Molland's mellow vocal on the acoustic "Sweet Tuesday Morning" is a heartfelt performance. Ham gets behind then piano for "Take It All". The rocker "Suitcase" closes the first broadcast as an extended all out jam by Badfinger with Gibbins building in intensity on the skins for a rousing finish.

The second stage session from August 1973 begins with the pounding rocker "Love Is Easy". "Blind Owl" showcases a burping bass groove by Evans. "Icicles" is a quirky slow rocker. "I Can't Take It", a driving rocker, brings the last mini-set to a finale.

These crisp performances underscore the band's ability to let loose as a performing unit. Badfinger never realized its unfound potential to become one of the best British bands of 1970s. The classic Evans/Ham composition "Without You" from No Dice has generated cover hits for both Harry Nilsson and Mariah Carey.

Badfinger was both blessed and cursed by their association with The Beatles. Paul McCartney composed their 1969 top five hit "Come And Get It" for the film, Magic Christian, starring Ringo Starr. John Lennon invited band members to record on his Imagine album from 1971. Ringo Starr's 1971 smash single "It Don't Come Easy" features group members performing on the backing track.

George Harrison had extensive involvement with Badfinger. The band joined Harrison in the studio for the recording of 1970's All Things Must Pass. Pete Ham performed "Here Comes The Sun" on stage with Harrison at the Concert for Bangla Desh in 1971. Harrison would also produce tracks for their 1971 album Straight Up.

The tragic losses of Pete Ham in April 1975, and of Tom Evans in November 1983, was a double blow to the band as it struggled to achieve elusive success. Evans and Molland were joined by pianist Nicky Hopkins, guitarist Joe Tansin, and drummer Andy Newmark, releasing Airwaves in 1979. The duo was joined by Yes keyboardist Tony Kaye in 1981 on the recording of Say No More. 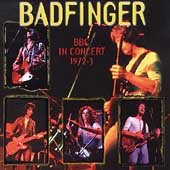 That 70's Band on the BBC
Badfinger broadcast over the BBC