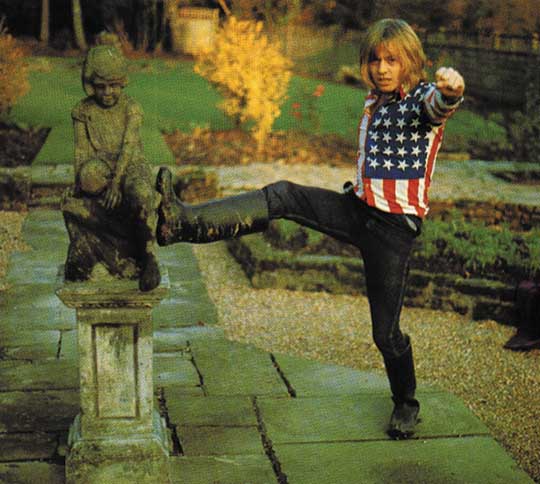 The contributions of John Lennon and Elvis Presley on modern popular American culture are commonplace. Another important, but forgotten individual who was vital to the emergence of British rock music in the 1960s posthumously celebrates a 60th birthday this month. His impact in musical endeavor overshadows all other rock'n'roll bands, excluding The Beatles.

Lewis Brian Hopkin-Jones was born in Cheltenham, Gloucestershire, on February 28, 1942. He drowned under suspicious circumstances on July 3, 1969 at Cotchford Farm in Hartford, Sussex. Jones launched his Rollin' Stones r&b combo with Stu on July 12, 1962 at the Marquee Club in London. 40 years later in 2002, his band is preparing to launch their first tour of the 21st Century.

Together with Ian Stewart (Stu 1938 - 1985), they formed a nucleus as the original founding members of The Rollin' Stones. Jones named the group after a Muddy Waters song, inspired by his passion for Black American rhythm & blues artists. His drive for popularity was the ignition during their embryonic phase that propelled the group to prominence. The blues duo were joined by vocalist Mick Jagger, guitarist Keith Richards, drummer Charlie Watts, and bassist Bill Wyman.

Brian Jones' slide guitar work was ahead of its time. He was a gifted musician with an uncanny knack for excelling on new instruments, adding exotic textures and subtle flavor to early Stones recordings. Jones poured his intuition and ability as a talented musician into these songs, giving them the right feel necessary to top the charts. The Stones survived by scoring hits from those singles released as 45s in the 1960s.

"I Wanna Be Your Man", "Little Red Rooster", "19th Nervous Breakdown", "Paint It Black", "Mother's Little Helper" b/w "Lady Jane", "Ruby Tuesday", "We Love You", and "2000 Light Years From Home" are all classic recordings that benefited from musical textures of an exotic instrument or guitar solo performed by Jones. "Under My Thumb" is a phenomenal 1966 album track that received his special touch.

Evidence suggests that Jones did compose and record some embryonic Rolling Stones material. "Wake Up In The Morning" is an October 1963 commercial jingle the Stones recorded for Rice Krispies Cereal that was utilized for European consumers. The music is vintage sounding Stones, composed by Jones. "Dust My Pyramids" is thought to be a Jones instrumental performed by the group on a January 1964 BBC Radio broadcast.

"Sure I Do" dates to a November 1963 recording session at the Regent Sound Studios in London featuring Brian Jones on lead vocals. Legendary crooner Gene Pitney is to have assisted Jones in the completion of this track. "I Want You To Know" is another unreleased Rolling Stones recording from December 1963. This track was produced into an acetate demo and shopped around as a potential recording vehicle for emerging artists.

The haunting music of "Ruby Tuesday" is said to have been composed on the spot in the recording studio by Brian Jones, playing an original melody on a recorder. Richards on piano picked up on the notes. Both Marianne Faithful and Stewart have made comments, confirming his authorship of this musical masterpiece.

Brian Jones gathered himself together to compose the filmscore to the 1967 Volker Schlondorff movie, A Degree Of Murder a.k.a. Mord Und Totschalg. The soundtrack was recorded at IBC Studios with producer Glyn Johns, featuring session musicians guitarist Jimmy Page, pianist Nicky Hopkins, and background vocals from Peter Gosling.

Mord Und Totschalg starred Anita Pallenberg and was the German entry for the 1967 Cannes Film Festival. Jones versatility is represented by his performances on autoharp, dulcimer, harmonica, organ, and sitar. In addition, the music is complimented by strings and orchestral accompaniment. A video cassette version is supposedly available in Europe as a PAL tape.

During one of his journeys to Morocco, Jones discovered the Master Musicians of Joujouka. Brian Jones Presents The Master Musicians of Joujouka was recorded by Jones and posthumously released in October 1971. Jones had attempted to introduce ethnic music to a global audience. The Glimmer Twins would later invite the MMJ to perform on the track "Continental Drift" from 1989's Steel Wheels album as a nod to Brian.

As the Rolling Stones became popular as antecedent to the well loved Beatles, the British authorities decided to commence a crackdown against Jagger, Jones, and Richards based upon gossip forwarded by media informants. Jones could not weather the incessant Scotland yard harassment campaign conducted upon him. His relationship problems with Anita Pallenberg and with the band members intensified his abuse of drugs and alcohol. An undiagnosed serious medical condition impeded his physical stamina and mental health.

Brian Jones died under what remain mysterious circumstances. Sadly, he never reached his potential as a musician or as a composer. Jones will exist in anonymity as the unknown hero of rock'n'roll, being the ultimate rock persona tragedy. The musical achievement of the band he envisioned, however, has reached its 40th Anniversary as a major international touring success. Together with The Who and the Moody Blues, these are the only three surviving groups from the 1964 Class of British Invasion bands.

Through The Past Darkly was a compilation album with a poem in memory of Brian released on September 12, 1969, following his untimely death. 25 years later in 1994, Symphonic Music of the Rolling Stones was also dedicated to Brain Jones. Historic sessions of the Rolling Stones recorded for BBC Radio broadcasts from 1963 through 1965 have been uncovered, but remain unissued featuring the outstanding guitar work of Brian Jones.

Today, the Stones are now a R&R institution, recognized by an infamous pair of fire-engine-red lips and protruding tongue. The band has set a standard for the mega-tour with Steels Wheels 1989, Urban Jungle 1990, Voodoo Lounge 1994, Bridges to Babylon 1997, and No Security 1999. Their powerful publishing catalogue and back masters of vintage rock'n'roll classics continues to generate millions of capital in royalties.

Brian Jones' vision of his Rollin' Stones would manifest into a nightmare for law enforcement all over the globe at the height of their infamy as a menacing force in popular music. The underground counterculture and flower power movements of the 1960s were in part empowered by the path lead by Jones. Rest peacefully Brian. 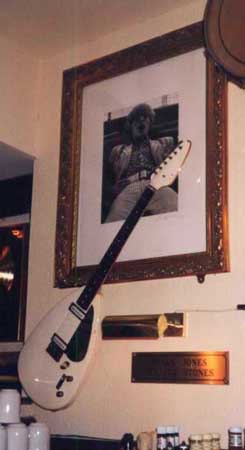 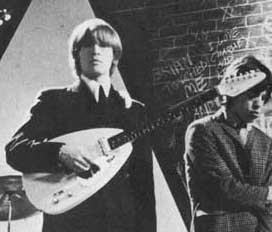