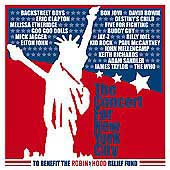 The Concert for New York City was held at Madison Square Garden on Saturday, October 20, 2001, in honor of the heroes, survivors, and victims of the 9-11 attacks on the World Trade Center twin towers, the Pentagon, and those who lost their lives in rural Pennsylvania. Comprising 31 performances by 20 artists, the performers opened their hearts on this premium collection of live entertainment.

The concert itself became a celebration of life for the five thousand municipal rescue workers attending the benefit as invited guests. These male and female volunteers who place their lives at risk whenever they respond to an emergency, enjoyed this much needed distraction from the horror and trauma they had experienced.

The Concert For New York City features an exceptional bonanza of heartfelt dedications and defiant rockers. This musical healing event combined the elements of a House Party, an Irish wake, and a fundraising telethon. The track sequencing of the original musical performances recorded at the Garden have been altered to create a stronger running order on disc. This double disc set continues to raise funds for the families impacted by the terror of 9-11-01.

Ten performances did not survive the cutting room floor. Perhaps the biggest loss is Macy Gray's unique live version of The Beatles 1967 Sgt. Pepper classic "With A Little Help From My Friends". She is the only artist not to appear on the musical memoir. One missing number from The Who, "Behind Blue Eyes", will appear on the DVD version. A John-Joel duet on "Your Song" was also excised from inclusion.

Garden Headliner Paul McCartney's premiere performances of "Lonely Road" which opened his set and the poignant "From A Lover To A Friend", both from his new album, did not make it onto the concert collection. The special song he composed in tribute to the innocent souls lost on that day of infamy, "Freedom", was recorded twice during the Garden event. The formal McCartney live recording was included as a bonus track on his studio disc, Driving Rain.

There are so many fantastic performances included in this double disc set. The major musical highlights of the October 20th Garden engagement are featured in review. Patriotic Americans purchasing this outstanding collection make a small contribution of support to the Robin Hood Relief Fund to help those touched by the horror of 9-11.

David Bowie opened the memorable evening with a mellow version of Simon & Garfunkel's "America". The British singer was backed by the Paul Shaffer House Band as they raised the excitement level by performing the anthem of the event, Bowie's 1977 classic "Heroes". Jon Bon Jovi sang a soft rendition of "Living On A Prayer".

The Goo Goo Dolls performed a rousing take on Tom Petty's "American Girl". Billy Joel's haunting "Miami 2017 (Seen The Lights Go Out On Broadway)" took on special meaning with the disaster striking the Big Apple. After concluding the song he stated, "We're not going anywhere". His "New York State Of Mind" was another crowd-pleasing selection.

Eric Clapton appeared on stage joined by legendary blues guitarist Buddy Guy, but unfortunately only one of their two numbers was included on disc, "I'm Your Hoochie Coochie Man". Saturday Night Live alum Adam Sandler reprised a comedic role from the latenight weekend program, "Operaman", singing humorous operatic lyrics to the wild applause of the Garden crowd. The Backstreet Boys harmonized together on "Playing Games With My Heart".

Glimmer Twins Mick Jagger and Keith Richards cranked out the Stones 1978 disco hit written about New York City's Central Park, "Miss You". The house band's slower tempo sounded great supported by Keef's characteristic guitar chops. Perhaps one of the standout performances of the evening was their delivery of the Stones 1968 Beggars Banquet classic, "Salt Of The Earth", concluding the first disc.

Classic British rockers, The Who, open disc two. The legendary trio poured their hearts into their performance, beginning with a raucous version of "Who Are You", featuring Roger Daltrey on acoustic guitar. All accounts have confirmed The Who stole the show that night. Pete Townshend attacked his electric guitar during the coda of "Won't Get Fooled Again", igniting cheers from the Garden.

With creative editing, both of Melissa Etheridge's interrupted acoustic jams, "Come To My Window" and Bruce Springsteen's "Born To Run", became polished performances. James Taylor turned up the emotion as he sang his classic tune, "Fire And Rain". John Mellencamp rocked out on "Little Pink Houses" with support from Kid Rock. Five For Fighting delivered one of the more touching performances with a somber unplugged version of their smash single "Superman (It's Not Easy)". Elton John's lone contribution is "Mona Lisas and Madhatters", which he performed solo.

Paul McCartney's live tracks comprise three classic Beatle songs, "I'm Down". "Yesterday", and "Let It Be". The young backing band added punch to Macca's mini-set. "Yesterday" was particularly moving as he began singing solo and was joined by a string quartet to embellish his performance. "Let It Be" featured the support of many guests with Sheryl Crow singing on the chorus and Billy Joel playing along on keyboards.

McCartney's tremendous tuneful tribute to the family and friends of those fallen heroes and lost victims from the 9-11 attacks, "Freedom" the Finale version, appropriately closes out this collection of stellar musical performances. Eric Clapton tears away on his guitar solo, cheered on by the approval of McCartney himself.

Disc 2: FDNY (spoken word) - Mike Moran * Who Are You, Baba O'Riley, Won't Get Fooled Again - The Who * Come To My Window, Born To Run - Melissa Etheridge * Fire And Rain, Up On The Roof - James Taylor * Peaceful World, Pink Houses - John Mellencamp * Superman (It's Not Easy) - Five For Fighting * Mona Lisas And Mad Hatters - Elton John * I'm Down, Yesterday, Let It Be, Freedom (Finale) - Paul McCartney