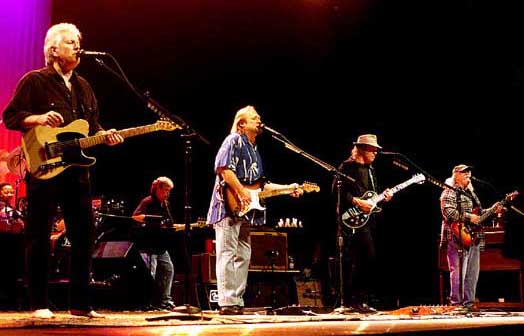 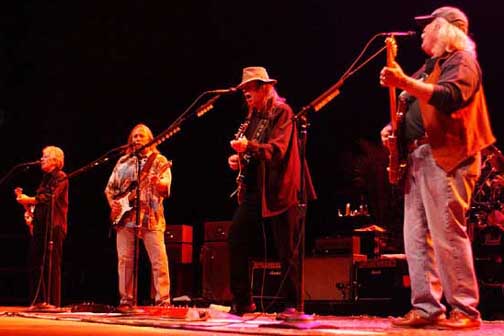 David Crosby, Graham Nash, Stephen Stills, and Neil Young brought their 2002 Tour Of America to the Baltimore Arena in Maryland on Saturday, April 20, 2002. CSN&Y have returned to the tour circuit to appreciative American audiences. 30 years after their first outing, these old soldiers deliver on the strengths of their past and the abilities of their presence.

Quadraphonic harmonies on acoustic guitars are the signature sound of CSN&Y. Their collective talents distill into an uncommon performance presentation. The combined catalogue of their individual or group compositions is staggering; however, the classic rock guitar legends are only mixing up a small selection of songs in performance.

Casually strolling out onto a stage with a tropical motif, CSN&Y opened the evening with a medley of "Carry On/Questions". Crosby wore a beaming smile, which projected his enjoyment of performing on stage. The axemen were aided by a platoon of guitar techs that patrolled the stage.

Young introduced a new Stills song, "Feed The People". The lyric 'Why not feed the people everywhere and let the peace begin' hearkens back to a time when popular protest songs called attention to important issues of their day. With an island beat featuring a harmony vocal intro, Stills played a commanding lead guitar solo.

Young's composition, "Southern Man", was an exciting rocker that got the crowd pumped up to sing along. He later dedicated "Cinnamon Girl" to the beautiful ladies of Maryland, ending the first half of the program. Again, the arena audience was fired up by another classic Young song.

After intermission, the mood and mode of the evening changed as Nash announced, "Time for some acoustic music". The quartet returned without their backing band, resting on stools with acoustic guitars which launched the second portion of the concert. "Our House" featured Nash on piano. "Old Man" was basically Young solo on guitar with slight phrasing from Stills. Larry accompanied on banjo, hidden in the dark behind the speakers.

Crosby and Nash teamed up for a tender duet on "Guinnivere" with Crosby on acoustic guitar. The full band returned for Young's "Harvest Moon", another highlight of the evening. A single spotlight generated a moon silhouette on the backdrop with Young adding a harmonica solo. Stills remarked Baltimore was a neat town and that they should play here more often.

"Half Your Angels", Nash's beautiful tribute to the lost children of the Oklahoma City bombing, was introduced by Crosby who reflected on its anniversary and recent events. Nash sat behind the keyboards for this moving melody. "Suite: Judy Blue Eyes" featured classic CS&N vocal harmonies. A 'reprise' of the song welcomed back the full band, which brought the house up on their feet. Stills delivered a hot guitar coda on acoustic guitar, tossing his pick into the crowd at the climax.

The second minor intermission was promoted as a 7th Inning Stretch. The late Harry Carey appeared on the video screens, coaxing baby boomers, displaced hippies, middle aged couples, and parents with children in tow to sing the baseball theme together as an eclectic chorus in the arena audience. Crosby fired up incense and began waving it around the stage.

Young opened and closed the 7th Inning Stretch. "Let's Roll" is Young's musical commentary on the 9-11 tragedy. An unanswered cell phone ringing serves as the intro to this heavy rocker. "Woodstock" rocked the arena with four part vocal harmonies as Stills ripped away on another tight solo. "Rockin' In The Free World" became an anthem as the audience responded in song. Young sang at one point with only the drums keeping time; then the song segued into Young's surprising solo of "The Star Spangled Banner, ending the concert on a high note.

The first encore was the 1967 Buffalo Springfield classic, "For What It's Worth", featuring a stunning Stills lead solo. The tempo was a little slower, which ended with Young tearing away at his wawa bar for a searing solo. Crosby and Nash adorned acoustic guitars for a C&W flavored version of "Teach Your Children". Bright colorful lights were splashed upon the backdrop during their final number.

As on observation, Neil Young's performances on his compositions generated enthusiastic responses from the arena audience. His songs rocked harder, his guitar solos were fiercer, and Young made more comments behind the microphone during the concert. The support musicians were bassist Donald 'Duck' Dunn, keyboardist Booker T. Jones, and drummer Steve Pott.

Shelia Kammer of Hamilton, 41, who attended with three friends, could only comment, "It was awesome. Totally awesome, totally awesome". She ecstatically cheered on CSN&Y throughout their evening performance whether the moment was a somber song or a loud rocker. She has kept all of her ticket stubs and claims to have an ancient CSN&Y concert stub from tours gone bye.

CSN&Y are donating portions of the 2002 tour proceeds to select activist groups. A percentage of tour receipts are being set aside each night for the Nuclear Information and Resource Center (NIRS), Voters for Choice, and the Buffalo Field Campaign, working to protect the remaining wild buffalo. These veterans of peaceful music demonstrations continue to support modern causes to promote awareness on social issues.

The famous quartet joined forces in 1970, recording a studio album and live album together. With Young's departure, the trio continued recording and touring. Their CSNY 2000 tour was highly successful, including an appearance at Farm Aid's 15th Anniversary Concert in September. CSN&Y have released four albums together: Deja vu 1970, 4 Way Street (Live) 1971, American Dream 1988, and Looking Forward 1999.