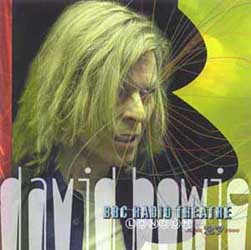 David Bowie is an extraordinary artist. His chameleon ability to reinvent himself time and time again as fashions, trends, and music tastes change is simply astounding. The British icon returned before BBC microphones to perform at a special gig recorded for radio broadcast.

BBC Radio Theatre, London, June 27, 2000 was released as a limited edition disc in February 2001. 130 Bowie fans were selected lottery-style to attend this intimate club gig, arriving from all over the globe from Australia, Canada, Europe, Japan, and the United States.

"Wild Is The Wind" has such a lush presentation in it's performance, one could almost mistake it for a studio rendition. "Ashes To Ashes", from Scary Monsters, is a humorous mini-music drama. The lyrics hearken back to the character of Major Tom introduced in 1969's "Space Oddity". The burping bass line adds an edge to this version.

Bowie includes a tremendous update of "The Man Who Sold The World". His BBC performance has a much richer sound than Nirvana's 1994 Unplugged In New York release. "Fame" was a major breakthrough smash hit for Bowie in 1975, co-written by the late John Lennon. Although this live rendition may have a slower tempo than the original #1 single, the new arrangement here has a distinct funky bounce to it.

Bowie delivers a decisively tough sounding version of "Cracked Actor". The naughty lyrics conjure comical imagery as the sound swells and swirls in intensity, supported by soaring vocals and stinging guitar work. "I'm Afraid Of Americans" is a quirky song that translates into a tour de force live.

David Bowie previously recorded for BBC Radio from May 1968 through June 1972. A double disc set, Bowie At The Beeb, collects examples of those broadcasts from that earlier period. However, this new disc is an outstanding artifact of one of Britain's top male performers.