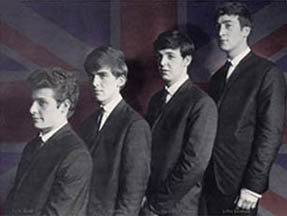 1962 began on the highest note for The Beatles. The Liverpool quartet had their first official record studio session, auditioning for Decca Records in London on New Year's Day. Brian Epstein had secured an audition for the lads at Decca's West Hampstead Studios in Broadhurst Gardens. The tapes of their 1962 studio audition would not actually be released until 20 years later.

Having acquired their second manager in November 1961, Epstein promoted the band relentlessly. Things began to improve gradually for the group, but The Beatles became an all consuming passion for Epstein. He was enamored by their stage presence and their unbridled sexuality. As Beatlemania mushroomed, Epstein could be found in the wings during a Beatles concert openly weeping as their fame ballooned to ever greater heights.

Beatles John Lennon, Paul McCartney, George Harrison, and Pete Best traveled to London for their morning studio audition with Mike Smith, Decca Records A&R rep. The Merseyside group banged out 15 numbers onto reel-to-reel tape in under an hour selected by Epstein to represent their performance strengths. The live mono two-track session recording did not allow for any overdubbing. The studio session was basically hurried and unproductive.

The clock was ticking as Brian Poole and The Tremeloes from Barking were to follow them for their audition, coinciding on January 1. Ultimately, Poole and his band from Essex made the cut because their travel expenses would be less. The Beatles had hoped to pass the audition and felt dejected by the experience. Ironically, the West Hampstead studio was less than two miles away from Abbey Road Studios at St. John's Wood.

History has Decca Records A&R head Dick Rowe rejecting The Beatles on the basis of his statement that guitar groups were on their way out. However in May 1963, Rowe would be granted a repreive to rehabilitate himself from a hot lead given to him by George Harrison, recommending he sign another up-and-coming British beat group, The Rollin' Stones. The Stones would record seven years of prolific material with Decca through 1970.

Lennon and McCartney both played guitars and composed original compositions for the fledgling band. On stage, Lennon played electric rhythm guitar with McCartney on bass guitar, Harrison on electric lead guitar, and Best on drums. The boys were attractive, entertaining, and engaging with their infectious brand of humor. After two years of touring together, The Beatles were in quest of an elusive recording contract to validate their musical existence.

The Mersey Sound associated with Liverpool was actually launched from the Port of Hamburg in Germany on the Elbe Fairway, which adjoins with the North Sea. The bustling Repabahn district of Hamburg was an adult environment that seduced The Beatles at an early age. The lads were working long hours as a bar band, entertaining both German audiences and British servicemen. These harsh conditions would prepare them for unparalleled international success in the 20th Century.

Pete Best auditioned to join The Beatles on drums and was accepted in August 1960. The adjective "Silver" had been dropped off the band's title a year beforehand. Best, Harrison, Lennon, McCartney, and Stuart Sutcliffe had departed for Hamburg for their first tour of duty within the week. It was in this German port city that the Northern lads met fellow Liverpudlian Ringo Starr, their future drummer.

A 1960 recording session backing Wally at the Akustik, a small studio in Hamburg, produced a 78 rpm disc of "Fever"/"Summertime" with Starr performing on drums. Original Beatles bassist Stuart Sutcliffe would eventually depart The Beatles during the Spring of 1961, leaving the bass guitar chore to be handled reluctantly by McCartney. Tragically on April 10, 1962, Sutcliffe died of a brain hemorrhage. Stu was Lennon's close friend, and his face can be found within the Sgt. Pepper cover art collage.

"My Bonnie", a German single featuring vocalist Tony Sheridan with The Beatles was recorded in 1961, and reached #5 on the music pop charts of Germany. Requests by Liverpool teenagers for this 45 rpm brought The Beatles to the attention of Brian Epstein at his NEMS department store. Material recorded at Friedrich Ebert Halle for a full length LP was released in August 1961. "Cry For A Shadow" was a Harrison-Lennon original instrumental that appeared on the Polydor album.

The rising popularity of The Beatles earned them valuable broadcast airtime on the BBC Radio program "Teenager's Turn (Here We Go)" on March 7, 1962. Best made another appearance performing as a Fab at the Manchester Playhouse Theatre before a live audience on BBC Radio in June 1962. McCartney subsequently purchased a July 1962 Cavern Club performance recording of 16 songs from Sotheby's at auction, featuring "Matchbox" sung by Best.

Epstein would have the great fortune of meeting Sir George Martin A&R Director for the Parlophone label, a subsidiary of EMI Records. Martin signed The Beatles not on the basis of their musical audition, but because of their spirited interaction with him. He had recognized that special quality in The Beatles themselves that earned them their recording contract. Best was still in the band during their initial recording test at EMI Studios on June 6, 1962.

Best sat behind the skins at the Cavern Club for the last time on August 15, 1962. His dramatic termination carried out the following day by Epstein would end the embryonic phase of the emerging Beatles as they embarked on a rewarding recording career with Parlophone Records under the direction of record producer George Martin. The Beatles recorded 27 #1 chart topping hits from 1962 through 1970, collected on the 2000 release simply entitled "1".

The Decca audition tapes were eventually released as The Complete Silver Beatles on vinyl in September 1982. Former Beatles drummer Pete Best conducted a promotional tour in conjunction with the release of the album. The record contained only the 12 cover songs recorded by the band. Three original Lennon-McCartney compositions were left off the release. Two of these Beatles songs would be subsequently included on 1995's Anthology 1.