Donovan delivered a stunning solo performance in Annapolis, Maryland, at the Rams Head Tavern on Wednesday, July 9, 2003. Many have labeled Donovan as Scotland's answer to Bob Dylan, but this is completely misleading. Donovan is Donovan period.

Annapolis received an intimate glimpse into the personality and life experiences of a major `60s icon. Donovan's personal vignettes and storybook adventures with The Beatles in India are absolutely priceless. His insider position and participation during the 'Flower Power' decade gives him a unique perspective of reflecting on that era.

Quietly appearing on stage, Donovan was greeted warmly by a sold out house. He began his lengthy set with "Gypsy", which featured a Celtic chant passage. "Catch The Wind" showcased a piercing harmonica solo, aiding the melody. Afterwards, he pulled up a stool to relax and continue his performance.

Donovan shared the origins of "Sunny Goodge Street". His humorous lyrics produced a chuckle out of himself perched upon the stool. The intimate audience enjoyed his mellow ballad "Jennifer Juniper". Donovan's strong vocals were complimented by his inclusion of French lyrics.

His segue into "Isle Of Islay" was prefaced with his admission, "In `66, I was the first popstar to be busted for smoking pot". Scotland Yard had conducted a bogus raid wherein the arresting officer had brought his own stash to plant on the young guitarist. "Can you imagine me hanging naked off the back of a policeman?", brought gaggles of laughter. "He didn't even feel the weight".

Immediately after the fabricated incident, the offending officer stated, "You know Don, it's only my job. Can I have an autograph?". He utilized a Scottish accent with his acoustic accompaniment for "Isle Of Islay". Donovan had captured a rare musician's moment on stage with his rousing rendition.

He asked, "Can you sing?", before launching into the hit single "Sunshine Superman". The crowd joyously joined in on the chorus. Donovan followed that with a stellar vocal performance on "Hurdy-Gurdy Man". During the extended bridge, he proceeded to relate tales about his journey with The Beatles in India.

One vignette described how John Lennon broke the ice on their initial arrival at the ashram. Mimicking John in Beatles tongue, Donovan retorted, "Now there's a good Guru", (as Lennon patted him on the head). George Harrison eagerly contributed a verse for Donovan's song. Although never recorded on the original studio track, Donovan sang George's lyrics during the reprise, which generated a standing ovation.

A cool version of "Mellow Yellow" began his first encore set. Donovan had the audience ad lib a hum for the absent horn section at the bridge. He engaged his fans by broaching the comical subject matter of his song, "O.K., let's clear this up. Can you get high from smoking bananas ... of course not". He further mentioned an appearance at a R&R Hall of Fame Psychedelic Sixties exhibition where this topic came up in conversation with Country Joe.

The entertaining troubadour returned for a final encore, performing "Season Of The Witch". His acoustic guitar groove increased in volume on the chorus, producing a standing ovation. Donovan's popular quirky sing along for "Goo Goo Barabajagal (Love Is Hot)", spotlighted his cool picking style on the last song of the evening. "I'm so pleased, I thank you", was Donovan's parting comment before appearing in the hallway to sign autographs.

A Mellow Fellow solo
Donovan is engaging and entertaining 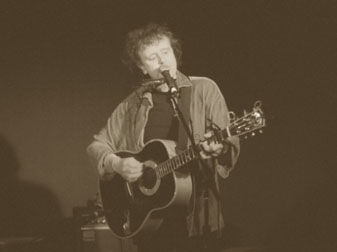