Bill Wyman has perfect timing. His second band biography, Rolling with the Stones, has been released to coincide with the Rolling Stones' Fortieth Anniversary. This comprehensive book covers the lives of the individual band members from birth, and the group's illustrious career from their embryonic years through the 1999 No Security Tour.

Unlike Stone Alone (Wyman's 1990 autobiography, which reads like a regular book), Rolling With The Stones is an incredible look back at Wyman's participation as bass guitarist in the World's Greatest Rock'n Roll Band. His timeline format follows the band as each member discovers the life-altering sound of rock'n roll and gradually each other.

Bill Wyman, an original founding member of the Rollin' Stones, has outdone himself, producing a fantastic rock'n roll biography that successfully rivals The Beatles Anthology as a brilliant bound presentation. Rolling With The Stones goes well beyond the ground covered in A Life On The Road released by the Rolling Stones in 1998.

Rolling With The Stones almost acts as an interactive tome, stitching rare photos of faces and places with juicy tales and personal accounts of what happened when and where. Wyman stories are rich in detail, and constitute a massive undertaking to collate. The style of the layout is both engaging and fascinating. The book begins shortly before Wartime Britain and describes the early childhood's of the band members.

Other curious objects are depicted as clues that symbolize events from the group's past or lyrics from the band's catalogue. A bottle of cherry soda, a French Horn, a Stars & Strips top hat, a goathead, insignia golf balls, groupie panties, a pair of dice, and white butterflies all connect as images that relate to a memorable "Stones moment".

Photographs reproduced throughout the book span personal photos, performance photos, promo photos, press photos, professional photos, and product photos. The photographs appear in both glorious color and classic black and white. There are minor factual errors found in the fine print, which considering Wyman's history as band historian, is rather peculiar.

Rolling With The Stones is the second mammoth collaboration by Wyman and co-author Richard Havers published by Dorling Kindersley. The team previously released the critically acclaimed Bill Wyman's Blues Odyssey in 2001.

Rolling With The Stones is a must-have for every hardcore Rolling Stone fan. Wyman's organization of facts, attention to detail, and intimate recollections are an authoritative insider's view of the Rolling Stones recording in the studio, performing on stage, and living their private personal lives. 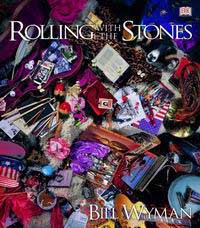