Portraits of Micky Dolenz, Cass Elliott, Brian Jones, Nicky Hopkins, Nico, Andrew Oldham, and Peter Tork capture them captured interacting in the audience at Monterey. Many of the musicians hung out with the audience to watch their peers on stage, an unheard of artist activity in today's environment.

Candid shots backstage, on the fairgrounds, in the vending areas, and among the audience recall the atmosphere of the historic weekend.

Guest commentaries quote the personal observations of notable performers and at the Monterey Pop Festival. Comments from Jerry Garcia, Bill Graham, John Phillips, Grace Slick, Derek Taylor, and Pete Townshend provide an historic account for those who were not in attendance.

It Happened In Monterey projects the innocence of the era on the young faces of the fans and the musicians at Monterey. Mayes glances back in prose and photos with a firsthand glimpse of those who participated on stage at Monterey. The book quotes fans, musicians, and industry associates who were firsthand witnesses.

Mayes preserved performance photographs that reads like a Who's Who registry from the Rock And Roll Hall of Fame: Big Brother and the Holding Company, Eric Burdon and the Animals, The Byrds, Canned Heat, Country Joe and the Fish, the Grateful Dead, the Jefferson Airplane, the Jimi Hendrix Experience, The Mamas and The Papas, the Steve Miller Band, Lou Rawls, Ravi Shankar, Simon & Garfunkel, and The Who.

Farm Aid, Lollapalooza, Ozzfest, and Lilith Fair are modern festival-style events. The Monterey Pop Festival is the grandmother of all festival concerts today. Several acts debut on the stage at Monetery, launching the careers of musicians now considered classic artists.

Elaine Mayes graduated from Stanford University in 1958, and went on to study photography at the San Francisco Art Instutute. She became a photojournalist and commerical photographer before teaching photography and film at the University of Minnesota in 1968. 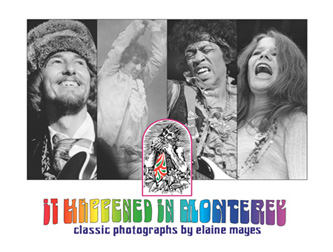