Released in 1981, Concerts for the People of Kamuchea remains unissued on compact disc. The amazing performances found on this album originated from talks between musician Paul McCartney and U.N. Secretary-General Kurt Waldheim, who discussed a possible fundraising event in aid of the starving Kampuchean people.

McCartney took the initiative to organize a series of four concerts held at the London Hammersmith Odeon during the final week of December 1979, to coincide with the New Years end-of-year celebration. Wings had just completed a U.K. Tour, which was launched with three homecoming dates for Sir Paul in Liverpool at the Royal Court Theater.

Side One features four tracks from The Who. Their powerful set captures the band in peak performance with Kenney Jones, following the loss of founding drummer Keith Moon. "Sister Disco" is a standout rocker for Who fans to enjoy live.

Side Two opens with three tight jams by The Pretenders. Elvis Costello, supported by his Attractions, turns in a rough vocal on "The Imposter". Rockpile rocks out on "Crawling From The Wreckage" and is joined by Zeppe vocalist Robert Plant who handles lead vocals on the popular A.O.R. track, "Little Sister".

Side Three showcases singular live snapshots from Queen, The Clash, Ian Dury & The Blockheads, and The Specials. Unfortunately, three of the lead vocalists from these groups, Freddie Mercury, Joe Strummer, and Ian Dury, are no longer with us.

Wings, in its final line-up, featured Paul McCartney, Linda McCartney, Denny Lane, guitarist Laurence Juber, and drummer Steve Holly. Three numbers from their Odeon set on this collection include "Got To Get You Into My Life", "Every Night", and "Coming Up".

McCartney lead the all-star Rockestra lineup singing lead vocals on the raucous "Lucille" and The Bealtes classic "Let It Be". The incredible Rockestra all-star jam on McCartney's instrumental "Rockestra Theme" is a treat with Paul belting out, "Whoa ... Happy New Year!", at the climax of the stellar evening.

One would hope Concerts for the People of Kamuchea will be re-issued with expanded material from the four day event in the near future. As several of the participating musicians have passed since this was recorded, a DVD featuring performances from these historic concerts would be another musical bonus for classic rock fans.

Concerts for the People of Kampuchea vinyl
Side 1 - The Who
Side 2 - The Pretenders; Elvis Costello & the Attractions; Rockpile with Robert Plant
Side 3 - Queen; The Clash; Ian Dury & the Blockheads; The Specials
Side 4 - Paul McCartney & Wings; Rockestra 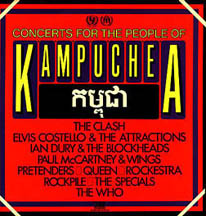