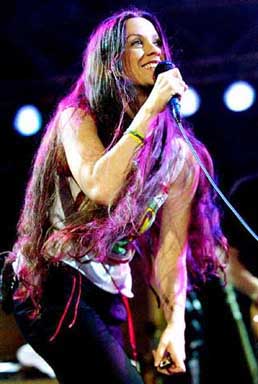 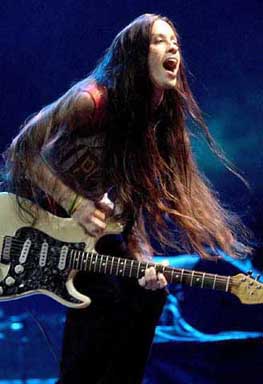 For her opening number, Morissette played harmonica on "All I Really Want". Alanis also played rhythm electric guitar on "21 Things I Want In A Lover", "Narcissus", and "Hands Clean"; three new songs premiered from her forthcoming album Under Rug Swept. Her shock-rock composition, "You Oughta Know", was great live.

"I dedicate this to you", was how she began "You Learn". Her new backing musicians proved to be a strong support band for her. Morissette was in high spirits offering the audience a holiday wish as she twisted and twirled both her body and hair across the stage. She closed her set abruptly without encore by singing "Thank You". The humorous "Ironic" was not performed in her mini holiday set.

Morissette, a Canadian native born in Ottawa, was a headline performer at the "Music Without Borders" benefit at the Air Canada Centre in Toronto, Ontario, on Sunday, October 21, 2001. Her current live band consists of David Isaac Levitt on guitar, Jason Paul Orme on guitar, Zak Rae on keyboards, Blair Sina on drums, and Eric Adam Avery of Jane's Addiction on bass.

December 8, 2001, was the 21st anniversary of the assassination of John Lennon. Morissette had performed "Dear Prudence" at the "Come Together: A Night for John Lennon's Words & Music" at Radio City Music Hall on October 2. She missed an opportunity to honor both lost Beatles John and George Harrison. During their inaugural tour, The Beatles had performed two concerts here at the then Civic Center on September 13, 1964.

Amid holiday lights dangling from the roof, six Ravens Cheerleaders appeared to pump up the crowd prior to Alanis Morissette's stage introduction. Considering the stark language of Morissette's randy lyrics, many families with children in the audience must have felt a little uncomfortable.

American Hi-Fi, Better Than Ezra, The Cranberries, Five For Fighting, and Train were other acts performing at WMIX The Mix 106.5's Mistletoe Meltdown IV. Oddly with such popular acts on a holiday bill, the Arena was no where near capacity. Seating in the 300 level was practically empty. On my way in, I was given a comped ticket by Sonja, an Arena usher.

Baltimore setlist: All I Really Want * 21 Things I Want In A Lover * Right Through You * Narcissus * Hands Clean * You Learn * You Oughta Know * Thank U