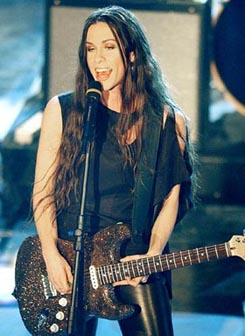 Alanis Morissette stalked the stage at Merriweather Post Pavilion on Friday, June 7, 2002, at Columbia, Maryland. For this visit, Morissette had the venue remove their orchestra pit seating to accommodate standing-room-only patrons to crowd around in the front of the stage to create a more exciting concert atmosphere.

Wearing a blue halter top with the breast area cut out to reveal a jiggling black brazier, the Canadian native made the Howard County stage her home. Morissette out on the road in support of her latest studio effort, Under Rug Swept, performed a total of eight numbers off the new disc.

Distortion, feedback and background noises coalesced as an intro for "Baba", a mystic-flavored rocker that opened the concert. Morissette gave the impression of singing to herself in her solitary manner of impersonal isolation even though she appeared on stage before a packed house. Crowd pleaser, "Right Through You", began with an organ and acoustic guitar intro. The slightly slower tempo was punctuated by Sinta's drumming.

"Purgatorying (part 1, part 2 & part 3)" segued among six songs during her set. In repeating this musical piece twice, the dark lighting during performance incorporated a thematic moment on stage. Morissette strapped on an acoustic guitar for the popular "Head Over Feet". Sporting a broad smile as girls sang the lyrics with her, she let loose with an entertaining harmonica solo.

"You Oughta Know", the song that propelled her musical reputation, rocked live. The bridge, featuring her humming and yelling, lent a dramatic effect in the delivery of the number as she paced back and forth on stage from side to side. The audience of both male and female fans responded in unison with cheers of approval.

The ecstatic reception of "Hands Clean" completed a stellar performance of her latest hit single. It got real messy, rocking the venue as the audience joined in and sang along for one of the major highlights of the evening. Once again, her composing skills drew upon her personal past that generated a compelling tale of repression and recovery.

"Uninvited", her power ballad contribution on City Of Angels, closed the evening with the band continuing to play after the singer ran off stage. The pavilion audience waited impatiently for Morissette to return. "Surrendering", a track from her latest album, led off her encore set. Playing electric rhythm guitar for the final time, the punchy rocker was well received.

"You Learn" generated another sing-along. Shifting her weight from foot to foot behind the mic, her vocals soared; especially when audience participation accentuated the lyric "the fire trucks are coming up around the bend". As the song built in intensity, she began to hop, jump, twirl her body, flail her hair, and race around the entirety of the stage, circling it three times with the encouragement of the crowd.

Singing softly with a keyboard accompaniment, the drums burst into the mix to fire up a tough version of "Thank U" from Supposed Former Infatuation Junkie. Her finger fidgeting reached a fever pitch as she fixed herself behind the mic stand. As the song came to a climax, she was joined center stage by her three mobile bandmates.

Morissette's musical presentation resonates with her fans because of an ability to express herself, her opinions, and her unique take on interpersonal relationships. Her stage presence combines female aggression and feminine empowerment, which young women read as decisiveness and independence.

Drummer Blair Sinta, keyboardist Zak Rae, guitarist Jason Orme, guitarist David Levitt, and bassist Eric Avery from Jane's Addiction comprise her current live band. Her rhythmic movements crisscrossing the stage are an ingrained part of her performance personae. The determination of her delivery is evident in her live performance.