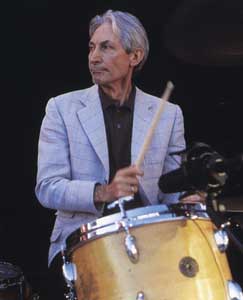 Charlie Watts never wanted to be a rock'n'roll drummer. His love, first and foremost, was Jazz. His participation as drummer in the 'World's Greatest Rock'n'Roll Band' has provided him the luxury of taking several jazz ensembles out on tour during stretches of inactivity with his day job.

Drummer Charlie Watts debuted his Charlie Watts and the Jazz Tentet at the Blue Note Jazz Club in New York City. The ten piece unit premiered two evening shows on Tuesday, November 6, 2001. The group was on the Blue Note bill for six days in a row with two gigs each night. The Blue Note is a long row house with a side stage in the center of the building that hosts stellar jazz performances in the heart of the Big Apple.

Performing with the Rolling Stones has its perks, allowing Watts to pursue his love of Jazz music. This 2001 tour is his sixth solo tour of America. The Charlie Watts Orchestra toured first in 1986/87. Three Charlie Watts Quintet tours followed in 1991/92/96. The Charlie Watts Tentet is the latest incarnation of jazz ensembles formed by jazz aficionado Charlie Watts.

Turning 60 this past June, Watts is perhaps the best rock'n'roll drummer alive (Keith Moon was the best rock percussionist during his lifetime); he is simply phenomenal on stage. Do I sound like a die-hard fan blinded by my affection for Charlie? I am not. If you haven't seen Charlie in his element live on stage, hop on it.

And then there is the drummer, a chap named Charles Robert Watts. For all of the media reports stating people have been avoiding trips to New York City, no one could say that about Tuesday night. People from all of the globe were in attendance at the Blue Note for the debut of the Jazz Tentet. Africans, Americans, Asians, and Europeans alike who share a common love for Jazz music and a fondness for this kind hearted grandfather married to Shirley Watts for 37 years, all made a point to travel to the Big Apple to be at the Blue Note.

Patrons attending the show came from Belgium, England, Holland, Italy, Japan, Norway, Peru, and Russia, as well as neighboring Connecticut and New Jersey. Neither terrorism nor anthrax kept these true blue Jazz fans away from the Blue Note. Some were on vacation here, some are living here, and some made the flight just to make this gig at the Blue Note. Still others had flown in from Japan after catching the Jazz Tentet appearing at the Tokyo Blue Note Jazz Club.

The Jazz Tentet launch coincided with Election Day in New York City as residents went to the polls to choose a new Mayor to follow in the footsteps of the overwhelmingly popular Rudy Giuliani. Republican nominee Michael Bloomberg won the 2001 NYC mayoral contest. With so many musicians appearing on stage this tour, a clear view of Charlie behind the skins was actually obstructed from several angles. Presencer had to walk off stage to sit at an organ set up beside the stage.

The biggest surprise of the late evening set was the performance of "Airto" off his latest disc, The Charlie Watts/Jim Keltner Project. This is my favorite track off the album that I nicknamed 'giggle bop' because of a repeating phrase throughout the track. "Elvin Suite Pt1 & Pt2" closed the set also from CW/JKP. Both numbers were given a more suitable traditional jazz arrangement for the stage.

With a concise, "That's it", Charlie completed another round of introductions before the band's encore. As he left the stage Charlie said, "Thank you and good night", before heading upstairs to the dressing room. Anthony Kerr was kind enough to provide me with some background info on their set. Charlie even greeted many Stones fans camped out in the hallway after the performance. I had met Mr. Watts three times before, and he truly is an English gentleman.

Green, King, Lemon, and Presencer were members of the Jazz Quintet touring band. Jazz band leader Watts expanded on this concept to create the Jazz Tentet, another winning combination of outstanding musicians in the field of Jazz music. This tour represents Charlie's third visit to the Blue Note Jazz Club on the A Line of the NYC subway system. Coincidentally, their lone encore was "Take The A Train", which I did from the Garden at the 32nd Street stop.

An unexpected variable of the evening was the presence of one Keith Richards. Richards appeared shortly before showtime to greet his drummer in the Blue Note dressing room. Stones fans were really making a major nuisance of themselves, unlike the other two visits I had to the Blue Note for Charlie in 1991 and 1992 when no one bothered Mr. Watts. However, Keith clearly enjoyed interacting with his fans, singing autographs and even posing for a few pictures.

After the band was announced and making their way on stage, Keith stated, "There's one ...", to the amusement of the audience. His ad lib's and offhand interjections took the edge off the quiet atmosphere in the club. As the percussionist began the intro to "Airto" with funny noises, Keith retorted, "I know the feeling ...", again igniting outbursts of giggles.

Keith has true affection for Charlie and has attended many of Charlie's NYC appearances. It's interesting to note their personalities, Keith a bohemian and Charlie a dandy. They have spent their entire adult life in studios and on stages together around the globe. Keith was visibly enjoying himself during the Jazz Tentet set.

When Charlie made his way to the edge of the stage to introduce the Tentet band members, Keith preempted Charlie with his remark, "As long as you never sing, we're all right". Charlie replied, "No, I won't sing tonight". Charlie was talking about the material the band was performing when he remarked, "This is a double act"; to which Keith replied, "And I'm the shill". There verbal interplay together was priceless, adding a comedic ambiance to the evening.

Keith had the best seat in the house actually. He was accompanied by his beautiful wife, Patti. With their 18th Wedding Anniversary approaching next month, the Stones couple were openly snuggling together. Keith had a small entourage with him at his table, and cheered Charlie on in approval during the second performance.

Brian Jones wanted Charlie Watts to join his upstart R&B combo, The Rollin' Stones during 1962. The Stones had repeated trouble finding and keeping a drummer. Ian Stewart recognized the addition of Watts was the catalyst for better things to come for the band. Charlie tossed his drumsticks in with their lot on January 14, 1963, making his first formal appearance behind the skins at a gig in Soho at the Flamingo Jazz Club. The rest is now R&R Hall of Fame history.

I had the incredible pleasure of watching Charlie play drums up close once at the Blue Note during his 1992 tour. I also trained my binoculars on him for a good deal of the Stones' August 3, 1994 concert at RFK Stadium. His appeal as a sound, solid drummer is simply unmatched beat for beat. His pleasant demeanor and humble presence on stage generates tremendous applause when he is introduced on stage with the Stones.

By incredible chance, my 58th Rolling Stones concert was on Charlie Watts' 58th Birthday, June 2, 1999. What a coincidence. It was great to be in the audience when Jagger introduced Charlie. He stepped out from behind his drum kit (which he rarely ever does!) as he was serenaded with "Happy Birthday" and thundering applause.

Watts wrote and illustrated Ode To A High Flying Bird in 1964. This children's book was inspired by the life of legendary jazz saxophonist Charlie Parker, better known to his fans as "Yardbird" or just "Bird." Subsequently in 1991, a reprint of his book was released as part of a special presentation featuring From One Charlie on disc and a Print of the late Charlie Parker. 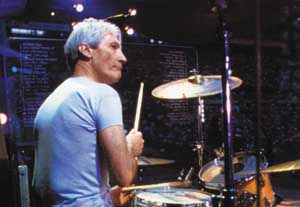 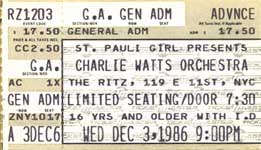 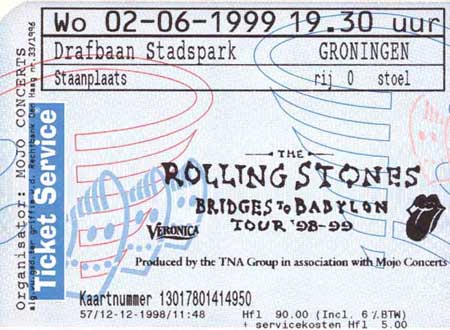