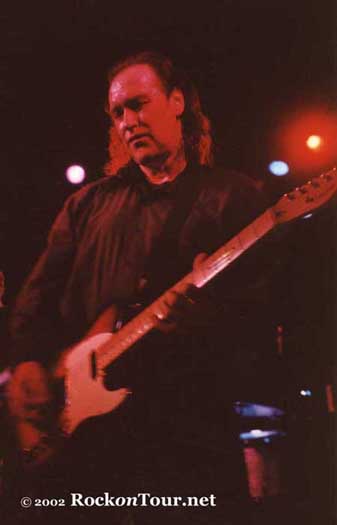 Dave Davies performed at the Recher Theatre in Towson, Maryland, on Wednesday, May 1, 2002. Davies (pronounced Davis) is out on the road in support of his new release, Bug. The Dave Davies' Kinks Kronikles is a review of classic rock British Invasion style, featuring Kinks songs near and dear to Dave and selections from his new album.

Davies' band features Kristian Hoffman on keyboards, Brian Myers on occasional rhythm guitar, David Nolte on bass, and Jim Laspesa on drums. Davies referred to them as The Ravens in performance. With so many classic Kinks songs to choose from, his repertoire mixes tunes written by himself and older brother Ray. Without doubt, the Dave Davies Band are a classic rock rave up.

Sans an introduction, The Ravens walked out on stage at 9:35 p.m., launching their set with the 1965 Kinks single, "Till The End Of The Day". The enthusiastic audience made up mostly of of baby boomer Kinks fans were ready for Dave the Rave. The brief 1965 B-side Kinks rocker, "I Need You", quickly followed on its heels. Davies stated, "It's great to be in Richmond", with a sly smile knowing that city was the next stop.

Davies stated "See My Friends" was his favorite Kinks song, dedicating it to his friends in the spirit world. His live version was fabulous, beginning with a mystic mood from Hoffman's instrumental touches. "See My Friends" featured an extended guitar intro by Davies, which propelled the song to transcend the show.

As the performance progressed, Davies simply drenched the melody with his distinct guitar style. Davies sang the middle eight bridge accompanied by Hoffman on keyboards. Truly a major highlight of this concert. Davies proclaimed, "It's so great to be in Towson, I got it right!", pronouncing the major Baltimore County city's name correctly.

Two new tunes from Bug were performed as one segued into the next, "Bug" and "De-Bug". These songs had a modern style that was surprising, as Davies delivered a rock rap lyric against a driving beat. 'I'll be the bug up your ass', was the amusing lyric he shouted from the title track of his new disc. The intimate stage generated tremendous energy from the four piece unit.

Davies asked what songs we wanted to hear. Rahul Suri called out "Death Of A Clown", which caught Dave's attention. He commented the keyboardist didn't quite have his part down yet when Suri retorted, "Crucify him". Davies replied, "..... ah, you've been watching too much CNN". Hoffman began the piano intro to "Death Of A Clown", replicating the wonderful 1967 single.

"You Really Got Me" raced to the top of international singles charts in 1964, fueled by Dave Davies' revolutionary guitar style. Heavier than other British beat groups of the day, Dave had discovered the 'SOUND' while playing his guitar and making fascinating sounds emanate from his amplifier. Davies walked to the edge of the stage to tear a new one into one of the most memorable rock solos recorded, proving his guitar abilities still set the neck afire.

For the impending encore, Davies left the stage while The Ravens remained on stage. After a dimming of the stage lights, he returned to perform his 1984 Kinks Word Of Mouth classic, "Living On A Thin Line". The Kinks 1966 B-side, "I'm Not Like Everybody Else", closed the Recher performance. Myers joined the band on rhythm guitar to support the finale.

Davies walked out from backstage to greet the last remaining patrons. Rahul Suri proceeded to procure Davies to autograph 20 record cover jackets in his possession. Dave kindly signed all of them as his sister, Rachana Suri, made apologies for him. Rahul and Rachana Suri are both massive Kinks fans. Rahul saw Davies in Annapolis on a previous solo tour. Rachana said, "The reason we love The Kinks is because of the sibling rivalry".

This is Davies' ninth tour of the States since embarking on a solo career as The Kinks have remained on hiatus. Dennis Hecht has seen Dave 55 times since he began touring solo in 1997. Disappointingly, "Imaginations Real" and "Unfinished Business" were two Davies solo numbers that did not appear in the set at the Recher Theatre.

Baby brother Dave founded The Ravens in 1963, a precursor to The Kinks. An unreleased Ravens acetate composed by Dave, "I Believed You", was issued in 1999 on his Unfinished Business double disc set. This astounding lost British Invasion era recording, just under two minutes in length, leads one to ponder 'what might have been' had Dave played a larger role in composing for The Kinks.

Davies' power chord approach to rock music would launch many successful bands in the wake of The Kinks' 1964 global smash single "You Really Got Me". His guitar technique laid the foundation for the heavy metal genre that came in the aftermath of the 1960s. Dave's guitar sound gave life to the music of The Kinks.

This was an incredible evening for me personally. Having been recognized as a writer, I was asked by a member of the sound entourage if I wanted to meet Dave backstage. Of course, I quickly accepted the invitation. Dave greeted me graciously and asked me what I thought about the show. My favorite number, besides the "Bug/De-Bug" medley, was his outstanding live version of the 1965 Kinks composition, "See My Friends".

After autographing my ticket stub, Dave told me to hang around afterwards so he could fetch me a copy of his new disc on Koch Records, Bug. He was very warm and generous with his attention. Dave even signed my copy of Bug as he was leaving the building. I put it on as soon as I walked in the door after the concert.

Towson setlist: Till The End Of The Day * I Need You * Suzannah's Still Alive * Creepin' Jean * A Gallon Of Gas (instrumental segue)/You're Looking Fine * Tired Of Waiting For You * Set Me Free * See My Friends * The Lie * Bug/De-Bug * Dead End Street * Rock You, Rock Me * Death Of A Clown * You Really Got Me * Encore: Living On A Thin Line * I'm Not Like Everybody Else 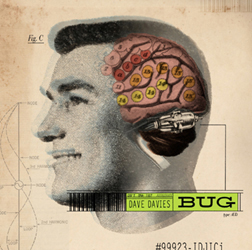