Dave Davies jammed on stage at the Cafe Tattoo in Baltimore, Maryland, on Saturday, May 10, 2003. Renown as lead guitarist for The Kinks, Davies put on a stellar performance, the first gig of a two-night stand. The intimate venue was packed shoulder to shoulder for the classic rock rave up.

The 2003 touring band featured bassist Derrick Anderson, drummer Jim Laspesa, and guitarist Jonathan Lea. Brian Myers was now solely mixing levels behind the sound board. Davies kicked off the evening with a guitar-whipped "Till The End Of The Day".

Davies greeted the enthusiastic crowd and quipped, "Hey, how ya doing? It's great to be here ... where am I?", for a chuckle. The classic rock veteran was in top form and enjoyed the positive feedback from a responsive audience.

Davies sang a large share of timeless Kinks hits written by older brother Ray. However, it was his signature guitar sound that propelled the indispensable musical ingredient in high octane rockers like "I Need You", which is a killer example of the early raw Kinks sound.

"Whose Foolin' Who" is an excellent pop-oriented rocker off his 2002 studio album, which generated excitement. The crowd joined Davies and sang along on the chorus to "Come On Now". The band played an intense rendition of "See My Friends", motivating Davies to deliver an inspired guitar solo and one of his strongest vocals during this performance.

Flattered by a request from the floor, Davies sang and played solo on an impromptu version of "Flowers In The Rain". After two personal pauses, Davies performed the poignant piece with support from Anderson's subtle bass accompaniment. Lea's shimmering guitar effect on "Bug" embellished the impact of this song in live performance.

Davies dusted off several of his own Kinks compositions for live workouts. "Death Of A Clown" generated audience participation, "Wicked Annabella" was drenched by Dave's guitar assault, and "Living On A Thin Line" ended with Dave's crunching guitar-based coda.

Davies and company treated the Baltimore crowd to a swampy cover of Elvis Presley's "One Night", which was one of many highlights during the evening. His raspy vocal imitated a `50s warble. The mellow Country-flavored undercurrent received added supported from Anderson's cool bass lines.

Laspesa pounded out an unrelenting beat on a punched-up "I'm Not Like Everybody Else". Davies belted out his vocals and contributed both power chords and a stunning lead guitar solo, blinded by total concentration. As the steady rocker climaxed into a crescendo, Davies leaned out into the audience to allow several fans to strum his electric guitar.

The group's lone encore was "You Really Got Me" for which Davies reprised his infamous lead guitar solo, originally immortalized on disc in 1964. His driven guitar-groove produced a powerful stage version of this golden Kinks classic.

John Underwood, a 50 year old Kinks fan, flew in from Atlanta to attend both weekend concerts. He remarked, "I was actually impressed with Davies' singing of the early Kinks songs, "See My Friends" in particular". He first saw The Kinks live in 1975, during the Soap Opera Tour.

Davies is currently promoting his new live release, Bugged ... LIVE!, available online only. Coincidentally, The Kinks performed in Baltimore at the demolished Hammerjack's Concert Hall on May 10, 1993, during the Phobia Tour.

Baltimore setlist: Till The End Of The Day * I Need You * Whose Foolin' Who * Creepin' Jean * Come On Now * A Gallon Of Gas Blues/You're Looking Fine * Tired Of Waiting For You * Set Me Free * See My Friends * The Lie! * Dead End Street * Flowers In The Rain (Dave solo) * Death Of A Clown * Wicked Annabella * Picture Book * It Ain't Over, 'Till Its Done! * Bug * Living On A Thin Line * All Day And All Of The Night * One Night * I'm Not Like Everybody Else * Encore: You Really Got Me 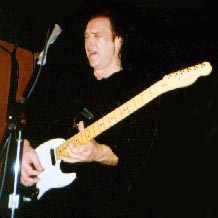