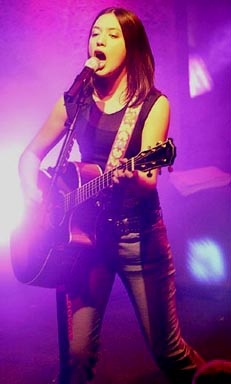 Eighteen year old guitarist/composer Michelle Branch headlined her first tour in support of The Spirit Room. Her debut commercial disc has been certified Gold with sales exceeding 500,000 units. The premiere tour made stops at smaller clubs, allowing her all-ages audience a more intimate experience to enjoy her music.

Among the squeals of teenaged girls and the rapid fire of flashbulbs, Michelle Branch joined her backing band on stage with an acoustic guitar in the midst of an extended, distorted musical intro that segued into "Sweet Misery". Branch experienced difficulty with her compact audio gear during the opening number as a tech hand attempted to correct the problem.

Her debut date at the 9:30 Club in Washington, D.C., was on February 23, 2002. Considering the young age of Branch's fan base, she did not appear on stage until 11:15 PM, late for even a Saturday night. Before commencing her second single "All You Wanted" featuring strong vocals, she exclaimed, "11:15, it's like my bedtime", in an adorable moment.

"Standing On The Edge" was the first new composition she premiered for the Capitol audience. Branched had said her voice was bothering her and had a few problematic moments. During this mellow number, the drums were louder than they needed to be.

Singing sans guitar on her power-pop composition "Here With Me", Branch projected confidence and was at ease on stage. Branch dresses like her fans, acts her age, and has a refreshing stage demeanor, not pretentious nor prima donna. Traveling together on the Metro, 14 teen-aged girls had a blind folded birthday girl in their concert party. Priced under $20, these girls were all able to afford a ticket and celebrate their friend's birthday that night.

Introducing "Desperately", Branch announced she had composed the song on the tour bus the night before. Alone on acoustic guitar, she welcomed friend, Jessica Harp, on stage to sing harmony vocals. This new song really showcased her potential as an emerging artist. The group of girls holding the center balcony position across from the stage all exclaimed, "We like it!" in unison when she finished the new tune.

Launching into "Everywhere" animated Branch, her band, and the crowd. Under a display of creative lighting, Michelle rocked as the audience began jumping and singing along. Branch sang "Goodbye To You" on her acoustic guitar in solo performance. This mellow ballad kicked into over drive as her support band walked back on stage to finish off the song.

At the completion of the number, she announced she would normally walk off and return for the encore after the chanting of the crowd. Since she was tired, she decided to carry on with "Wanna Tell You About It", another new song. "Something To Sleep To" was dropped from her encore set. The 1998 New Radicals track, "You Get What You Give", was the closing encore. Branch shook hands and tossed her unused guitar picks into an appreciate audience before departing the stage.

The stage set up was minimal with four paper maché walls that interacted with lighting that changed the moods of stage. Situated above the stage was a large banner of Michelle's face. The overall sound levels of the performance were very loud, and the mix of drums were up front and in-your-face.

Branch appeared on the Tonight Show last November, performing her runaway hit "Everywhere". Impressed by this young artist, I decided to catch her on this debut tour. Subsequently, her top 40 hit was picked up to promo the motion picture Kate and Leopard, appearing on the film soundtrack.

D.C. setlist: Sweet Misery * I'd Rather Be In Love * You Set Me Free * All You Wanted * Standing On The Edge * You Got Me * Desperately * If Only She Knew * Here With Me * Everywhere * Goodbye To You * Encore: Wanna Tell You About It * You Get What You Give