Neil Innes, a.k.a. Ron Nasty of The Rutles, made a rare stateside appearance in Hoboken, New Jersey, on Saturday, October 6. Innes alternated from performing as a solo act and being supported by Yo La Tengo. Hearing classic Rutles songs live is a treat indeed.

Yo La Tengo consists of Georgia Hubley on drums, Ira Kaplan on guitar, and James McNew on bass. The band records for Matador Records and previously backed Ray Davies on an engagement in 2000. Hubley said the band are fans of Innes and had been on a U.K. tour when they offered their stage services.

Innes walked on stage wearing a blonde Rutles wig and sporting an acoustic guitar. He opened with "I'm The Urban Spaceman", supported by all three members of Yo La Tengo playing kazoos. It was a hilarious sight to see and hear them as they performed the song.

Innes then proceeded to toss the Rutle wig aside and launch into "Goose-Step Mama" with Yo La Tengo, all bopping like animated MopTops. The next selection was "Between Us", a major favorite of mine from The Rutles disc.

The set included singles Innes composed for the Bonzo Dog Doo Dah Band, catchy Rutles tunes, songs from his solo career, and a few new ones tossed into the mix. The major theme of the evening was humor. Not only were the audience enjoying themselves, Neil was having a blast on stage himself.

The motherload of Rutles songs were from the television soundtrack. How could anybody stand still during "Ouch!" or "I Must Be In Love"? "Shangri-La" was the lone Rutles number performed from Archeology. The cramped SRO row house audience responded well to three new songs performed on stage.

"Evening Sun" was introduced as a form of 'hitch-Hiku' as Innes strapped on a Martin 'backpacker' guitar. "Face Mail In The Meat Zone" was a hilarious commentary of modern dependence on cyber communication and relationships. The next Innes solo project promises to be very entertaining.

During one interlude, Innes announced it was, "Time for a bit of comedy!" He turned his back to the audience, then turned around again wearing a clown's red nose-ball on his face. His humor flows naturally and his sense of timing is just impeccable. His ability to convey emotion in gesture and song is a true gift.

Innes began a keyboard medley solo on three songs: "Doubleback Alley" - "Good Times Roll" - "Another Day", with Yo La Tengo kicking in on the finale of the suite. The four musicians created a lush, dense sound to properly perform "Cheese And Onions", which was an impressive highlight of the evening.

"Piggy Bank Love", a Bonzo Dog Doo Dah Band song from 1967's Gorilla, was sung as a duet by Yo La Tengo's Ira Kaplan and David McNew. "Let's Be Natural" was the first of two encores. Innes ended the evening with "Mr. Apollo", a 1969 single.

After the first show, Neil went outside for a smoke and was very cordial to his fans, posing for photographs and signing autographs. He was just as funny and relaxed as he appeared on stage. Everyone enjoyed conversing with Neil.

Hoboken rests directly across from New York City on the Hudson River, and its Big Apple lights are beacons in the skyline. Without the WTC Twin Towers on the horizon, it was most peculiar. This gig was the perfect comic relief measure.

By chance, I had been cyber-surfing and found a small announcement mentioning Neil Innes with Yo La Tengo were playing Maxwell's the following weekend. I am so glad I made a point to drive up from Maryland. However, I met Russell who flew in from Los Angeles. His travel beat me by a couple thousand miles. 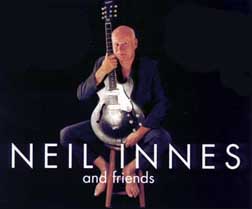