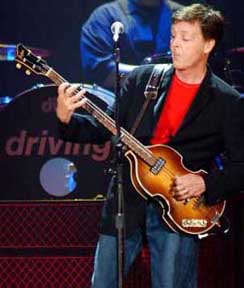 Sir James Paul McCartney appeared at the First Union Center on Tuesday, April 16, 2002. McCartney's Driving USA Tour made its only pit stop in Pennsylvania; Philadelphia home of the Liberty Bell. This city was the perfect setting for a rousing performance of "Freedom", which Macca composed in the aftermath of the 9-11 tragedy.

The R&R Hall of Famer has balanced nostalgia with technology, creating a concert experience unlike any of his previous tours. A choreographed presentation of visual and audio interaction mixes musical memories with celluloid projections. Wings clips from the mid 1970s accompany "Band On The Run", scenes from A Hard Day's Night pump up the crowd for "Can't Buy Me Love", and a montage of photos of the late George Harrison enhance the somber mood of "Something".

"Getting Better" is one of many rare songs included in Macca's concert cannon on this exciting new tour. The Sgt. Pepper album classic featured an extended electric guitar coda. After commenting "It's getting hot in here ... we're here to enjoy ourselves", Macca removed a thin gray jacket, rolled up his sleeves, and got down to business. The charismatic Beatle has not lost his musical Midas touch. Turning 60 this June 18, Sir Paul shows no signs of slowing down.

"Let Me Roll It", a Band On The Run classic, is a unique 1973 Wings rocker that is one of the tour highlights. Macca originally wrote this number to mock and knock Lennon but instead, recorded a song that actually complemented John's musical taste and style. Performed in 1993 and again on this tour, the Wings classic rocked Philadelphia.

Laboriel introduced McCartney at the piano for "Your Loving Flame", a new love song off Driving Rain inspired by fiancee Heather Mills. Four years after the death of wife Linda McCartney, Paul is anticipated to tie the knot with Heather this June. He dedicated his performance to a special person in the Philly audience.

An intimate interlude created the ambiance of an unplugged atmosphere during an extended mini-set. Alone on acoustic guitar, "Every Night" from 1971's McCartney album, is another outstanding moment during the concert. Audience adoration and applause erupted after the performance of this tender melody.

Dusting off "Mother Nature's Son" from the 'White Album', this was performed once before at an Earth Day concert at the Hollywood Bowl with guest Ringo Starr in April 1993 - Macca's only stage appearance with a fellow Beatle during his solo career. Wix supported Paul on accordion while the audience clapped along in time.

In tribute to his fellow fallen Beatles, Paul sang his 1982 composition for John Lennon, "Here Today". The venue grew silent as Paul began singing; emotion fluttered across Paul's face and in his voice. He also delivered a beautiful version of "Something" on ukulele (a gift from George), composed by Harrison in 1969. Following, he remarked George would have played it in a vaudevillian manner, which brought a chuckle to ease a shared loss.

Two love songs, written originally for Linda, took on new meaning in performance. Anderson introduced Macca on piano for "Maybe I'm Amazed", which featured Rusty's studied lead solo. "My Love" began with Paul's dedication, "For all the lovers in the house tonight". His 29 year marriage with Linda in the rock community is almost a millennium by today's standards.

The irony of a British subject singing "Freedom" in the cradle of American Independence seemed quite fitting. Just as colonial patriots rebuked tyranny in 1776, today Americans and Britons together repudiate terrorism in 2002. McCartney penned the tune for his special appearance at the Concert for New York City last October. The song is a battle cry of defiance in the face of malevolence. The powerful lyric, 'A right given by GOD', was sung in unison by thousands as a Statue of Liberty mural unfurled from the ceiling as a moving backdrop.

Carrying the full weight of the Beatles legacy is a daunting task, but clearly Macca remains ready to entertain and enjoy himself at the same time. Seated front and center behind a colorful piano, McCartney fired off a succession of his major Beatles compositions from "Let It Be", "Hey Jude", "The Long And Winding Road", to "Lady Madonna". Returning for the first encore, McCartney waltzed on stage waving an American flag to chants of "USA" from the audience.

"I Saw Her Standing There", a Beatlemania anthem, celebrates the abandon of youth. Macca took the baby boomer crowd and himself back to an age of innocence, belting out this 1963 Beatles rocker. A medley of "Sgt. Pepper/The End" completed the incredible evening with Sir Paul on guitar. Ray ditched his bass for an electric guitar to participate in a three-way jam with McCartney and Anderson. Fireworks and confetti complemented the concert as the band took their final bows on stage.

McCartney, in middle age, retains the stage energy of his youth. As the pied piper of the baby boomers, his Driving USA Tour 2002 has broken ticket sales records at venues all across the country. An expanding artist now creating paintings and composing poetry in addition to his music, Paul McCartney remains a phenomenal musician in performance on stage.

Philadelphia setlist: Hello Goodbye * Jet * All My Loving * Getting Better * Coming Up * Let Me Roll It * Lonely Road * Driving Rain * Your Loving Flame * Blackbird * Every Night * We Can Work It Out * Mother Nature's Son * Vanilla Sky * You Never Give Me Your Money/Carry That Weight * The Fool On The Hill * Here Today * Something (Paul on ukulele) * Eleanor Rigby * Here, There, And Everywhere * Band On The Run * Back In The USSR * Maybe I'm Amazed * C-Moon * My Love * Can't Buy Me Love * Freedom * Live And Let Die * Let It Be * Hey Jude * First Encore: The Long And Winding Road * Lady Madonna * I Saw Her Standing There * Second Encore: Yesterday * Sgt. Pepper's Lonely Hearts Club Band/The End