Captain of the Concert Circuit
McCartney maestro of Beatles magic 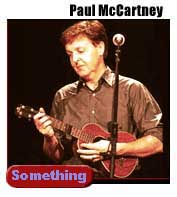 Paul McCartney is the pied piper of the baby boomer generation. His Driving USA Tour 2002 has broken ticket sales records at venues all across the country. Macca appeared at the first of two concerts at the MCI Center on Tuesday, April 23, 2002, in Washington, D.C.; one of seven cities scheduled with two stops.

Sir Paul assembled a band of young musicians to accompany him on tour. The backing band comprises Rusty Anderson on guitar, Abe Laboriel, Jr. on drums (both from Driving Rain ), multi-talented Paul 'Wix' Wickens on keyboards, guitar and flute (`90 & `93 tour alum), and Brian Ray on both guitar and bass. Although this is his first tour in 9 years, Macca's last visit to the Capitol was at RFK Stadium on July 4 & 6, 1990.

"Hello Goodbye", a #1 holiday single from 1967, opened the evening. This golden hit of pop psychedelia may never have been played live by The Beatles, but this young unit managed to recreate the aura of Sgt. Pepper euphoria to launch the concert on a high note. Next, the Wings favorite "Jet", fired the excitement level into the stratosphere. "All My Loving" spotlights clips of The Beatles landing in America on February 7, 1964, when Beatlemania swallowed the colonies whole; and recaptures the MCI audience.

Presenting new material in concert sometimes becomes an obstacle, but the Driving USA band punches up live versions of songs off McCartney's new disc. Macca's solo bass intro leads off "Lonely Road" with open stretches of an Arizona highway seen up on the screens; a nod to the memory of his late wife, Linda. Numbers from '1' through '10' splash around the multiple video monitors imitating raindrops for "Driving Rain", the title track, with Ray on acoustic guitar.

In an unprecedented move, McCartney performed a suite of songs as a soloist on stage. Whether on solo acoustic guitar or organ, McCartney delivered a stunning 11 song suite. Four of these numbers are captured on Unplugged (The Official Bootleg) from 1991. Macca's acoustic guitar solo during "Blackbird" is an impressive moment on this tour.

"Vanilla Sky" was performed sans disruptive projections from that film at the MCI Center. Macca was aided by Anderson on acoustic guitar and Wix on flute. He had played this tune at the March 2002 Oscars and was robbed when Randy Newman won the award in a political maneuver on the part of the Academy.

Alone at the piano, "The Fool On The Hill" featured clips of Paul from Magical Mystery Tour. Wix complemented the 1967 Beatles classic by supplying recorded instrumentation. An emotional tide swept through MCI as Paul began his tribute written for John Lennon, "Here Today". "Let's hear it for John", McCartney exclaimed. Following his moving performance of "Something" in memory of George Harrison, Paul commented, "God, bless him".

The musical debut of "Freedom" in the District of Columbia was welcomed by the Capitol audience. Following the assassination of November 1963, The Beatles burst upon America, performing at D.A.R. Constitution Hall in February 1964. Now 38 years later, Macca has returned to help heal Americans again with his medicinal music in the wake of 9-11. Ray introduced Macca behind the piano for the 1973 Wings classic, "Live And Let Die", supported by a montage of 007 clips, featuring Sean Connery, Roger Moore, and Pierce Brosnan with blinding flashworks.

Now sporting a 'no more land mines' T-shirt, no concert would be complete without McCartney's signature Beatlemania theme, "I Saw Her Standing There". However with an arrangement featuring a new piano passage, Wix impedes the classic rock melody. This timeless rocker was the only Fab composition he performed at his Cavern Club homecoming in December 1999.

The Guinness Book of World Records lists "Yesterday" as the most covered song by recording artists in history. Barely waiting for the applause to die down to begin the second encore set, McCartney sang his most treasured ballad solo on acoustic guitar. 37 years seem to drift by unnoticed as Sir Paul's musical masterpiece touches the hearts of everyone present with his delicate melody and yearning lyrics.

The big finale is a new medley coupling "Sgt. Pepper's Lonely Hearts Club Band" with "The End". Driven by a powerful drum bridge, Anderson, McCartney, and Ray attempt to outplay each other on electric guitar in a crescendo of rapid-fire lead guitar. A fab climax to an incredible evening of live entertainment from the Gemini bassist, Paul McCartney.

An 'Adopt A Minefield' blurb popped across the bottom of the video screens as Macca collected bouquets of flowers from fans in the front row. The billionaire music mogul even took a moment to sign an autograph on a copy of the 'White Album'. His new found activism must be a byproduct of his partnership with fiancee Heather Mills.

With such a massive catalogue of compositions, it must be hard to settle on 35 songs for a concert. The 2002 tour repertoire consists of 9 songs off The Beatles disc "1" (not counting "Something") with another 12 Beatles tunes in tow, 7 major Wings recordings, 3 numbers from his latest studio release, and his latest composition on a film soundtrack. Still, more stage material includes 3 solo melodies from before and after his tenure with Wings, who only toured the USA once in 1976.

Although material from throughout his career is included, Sir Paul does not perform any selections from his last two studio albums; Flaming Pie 1997 or Run Devil Run 1999. Inserting "Mull Of Kintyre" as an encore in Toronto has been the only deviation with his set list on this tour thus far. The intense production levels must limit his ability to mix up the repertoire.

McCartney, in middle age, retains the stage energy of his youth. Ringo Starr has been touring internationally with his All Starr Band vehicle since 1989. George Harrison conducted a U.S. tour in 1974, and tour of Japan in 1991. John Lennon never toured after he left The Beatles, but was planning his first live jaunt in 1981. Thanks Paul, for returning to the stage to perform trusted musical memories and creating new moments of magic.

April 23rd setlist: Hello Goodbye * Jet * All My Loving * Getting Better * Coming Up * Let Me Roll It * Lonely Road * Driving Rain * Your Loving Flame * Blackbird * Every Night * We Can Work It Out * Mother Nature's Son * Vanilla Sky * You Never Give Me Your Money/Carry That Weight * The Fool On The Hill * Here Today * Something (Paul on ukulele) * Eleanor Rigby * Here, There, And Everywhere * Band On The Run * Back In The USSR * Maybe I'm Amazed * C-Moon * My Love * Can't Buy Me Love * Freedom * Live And Let Die * Let It Be * Hey Jude * First Encore: The Long And Winding Road * Lady Madonna * I Saw Her Standing There * Second Encore: Yesterday * Sgt. Pepper's Lonely Hearts Club Band/The End