The Lost Songs of Lennon & McCartney, featuring Kate Pierson of the B-52's, Graham Parker, and Bill Janovitz of Buffalo Tom, partied on stage at the North Star in Philadelphia, Pennsylvania, on Sunday, May 18, 2003. The trio adapted unfamiliar compositions from the 20th Century's most famous tunesmith team.

Lost Songs of Lennon & McCartney: From A Window is an engaging album even if one is not a hardcore Beatlemaniac. These misplaced Mersey Beat classics have been revamped for performance live on stage. Pierson, Parker and Janovitz have teamed up to present an incredible show of unrecognized musical gems from composing legends, John Lennon and Paul McCartney.

The band ran through the entire album of material, expanding the dimension of the songs live on stage. Parker launched the evening with a strong start on "From A Window". Acoustic guitar was the primary instrument choice for both Janovitz and Parker throughout the concert.

Copely's electric guitar signaled a fierce "I'm In Love" sung by Pierson supported by Roye's deep bass notes from his modern Hofner Bass guitar. "I'll Keep You Satisfied" was restyled by Janovitz to sound as if the Rolling Stones took a turn on the tune.

In addition to acoustic guitar, Janovitz tagged on two harmonica solos. After the number, Bill imparted a comical tale about how he was unable to replace his ailing harmonica before the Philly performance as every harmonica store was closed on Sunday.

Parker's spirited version of "Bad To Me", a 1963 Lennon composition, proves it had the potential to be a popular Beatles hit had they decided to record it. Pierson took the lead vocal on "That Means A Lot", which featured the subdued electric guitar playing of Copely and a steady drumbeat by Magistro. The strong rendition showcased a surprise four-part harmony lyric of "Yeah Yeah Yeah".

Janovitz sang a tender take of "Goodbye", which he dedicated to the recently departed June Carter Cash. With Bill on acoustic and Mark on electric, they delivered an amazing dual guitar intro that included a whistling solo. "Woman" spotlighted Janovitz and Copely's extended acoustic guitar prologue in an 'unplugged' arrangement.

"A World Without Love", supported by keyboard accompaniment, welcomed a subtle harmonica solo by Janovitz. His bluesy vocals complimented the mellow tempo. Pierson's quirky romp on "Love Of The Loved" included two mouth-organ solos played by Jones. The coda choreographed an a cappella chorus and hand clapping by the group.

The first Philly encore debuted the backing band's incredible version of a 1967 McCartney instrumental, "Cat Call". Pierson followed that with a rousing rendition of "Step Inside Love", which absolutely rocked. All three vocalists took their turn singing a verse for "I'll Be On My Way" with the intensity of the song finishing in a crescendo finale.

Beatlemanians will thoroughly enjoy this unique presentation of Lennon and McCartney compositions. These classic songs have an irresistible effect, uplifting the spirits of every audience. Coincidentally, Lost Songs: Songs the Beatles Wrote But Never Recorded is a similar album project that was released in 1999. 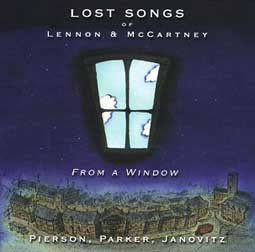