And then there was one guitarist
Former Genesis guitarist launches tour 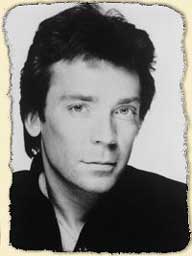 Steve Hackett, former guitarist with the British art-rock group Genesis, launched his mini-tour at The Birchmere Music Hall in Alexandria, Virginia, on Thursday, June 27, 2002. The legendary guitarist was supported on stage by Terry Gregory on bass, Roger King on keyboards, Gary O'Toole on drums, and Rob Townsend on wind instruments.

This amazing five piece unit covered more musical territory during its evening set than many modern bands can accomplish during any given brief career. With a massive back catalogue of studio and live recordings, Hackett actually demonstrated his musical diversity by performing a good cross-section of his original material.

Hackett began the evening, introducing his new composition, "Mechanical Bride". After a keyboard segue, a resounding crash enphasized with stobe lighting incorporated musical segments that weaved emotional waves of sound. Hackett's unique vocal style is truly one of a kind.

"Gnossienne No 1" written by the late French composer Eric Satie, was a gentle piece performed by Hackett on acoustic guitar accompanied by Townsend on Soprano Saxophone. When his guitar failed, Hackett commented those who, "want to be on stage and play guitar, have to be prepared for it when it dies in your hand".

Returning to electric guitar, "Walking Away From Rainbows" was a standout performance. Hackett commented "Spectral Mornings" had never been played live on stage. The piece showcased both keyboard and flute solos, generating the second standing ovation during the performance.

"Darktown" is the title track off Hackett's 1999 studio offering. Another rare vocal with mechanical enhancement, Hackett's guitar whined like an enraged hornet and featured O'Toole's energetic drumming. The power pop feel of "Every Day", featured harmony vocals and Townsend on tambourine. This intense performance commanded the fourth standing ovation of the evening.

Before Hackett performed the lone encore, he had the unpleasant duty of announing Who bassist John Entwistle had passed away earlier in the day. He mentioned his hesitance because of the collective high of the performance and wanted to, "Keep it aggressive". Audience cries of "No, no!" and "The Ox" were heard inside the intitmate theater.

Hackett said he admired Entwistle as a bass player, adding "We'll do this next number for John". The encore medley of "Shadow Of The Hierophant/Los Endos" packed a progressive punch with a symphonic delivery of piercing guitar, thundering bass, and a drum break. After his final standing ovation, Hackett agreed, "God bless him, that one was definately for John".

Steve Hackett joined Genesis in 1970, and participated in recording many of their more memorable albums. He released his first solo album, Voyage Of The Acolyte, in October 1975, with studio support from both Phil Collins and Mike Rutherford. Hackett left Genesis in 1976, following on the heels of vocalist Peter Gabriel's departure in 1975.

Hackett briefly recorded and toured with GTR in 1986. The international GTR tour that followed also featured Yes guitarist Steve Howe. GTR scored a hit single with "When The Heart Rules The Mind". Hackett's last stateside appearance before American audiences was in 1993.

Extraordinarily, Hackett remained following the performance to greet his fans, signing autographs and posing for photographs. He made a point to meet everyone who had waited in line, which may have surpassed an hour and a half after the encore. Band members interacted with the Alexandria audience as well. I thanked Hackett and his band for their stunning encore in memory of the late John Entwistle. 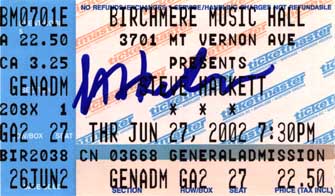