Saint Patrick's Day came early to Baltimore as The Chieftains performed at the Joseph Meyerhoff Symphony Hall on Tuesday, March 12, 2002. This Irish institution has garnered six Grammies during their recording career and one Oscar in 1976, continuing their mission as Celtic ambassadors celebrating the rich musical heritage and culture of Ireland.

Chieftains founder Paddy Maloney is the band's creative leader, playing Uilleann pipes and tin whistle. Even though this Irish folk band has traveled four decades around the globe, the current line up has held together for more than 20 years. Sean Keane on fiddle became a Chieftain in 1968. Harpist/keyboardist Derek Bell joined as a member in 1974. Bodhran percussionist and singer Kevin Conneff was welcomed in 1976. Flute player Matt Molloy has been with the group since 1979.

"We made it, we made it, 40 years together as The Chieftains", Maloney announced, soliciting applause and appreciation from the Hall. Tradition has an important influence on the band. The music, dance, and history of Ireland comes alive whenever The Chieftains take the stage for a performance. The group formed in Dublin in 1962, and is on tour commemorating their 40th anniversary together in 2002, a musical milestone.

Maloney addressed the six month anniversary of the 9-11 tragedy. He stated the band had been honored to perform at a memorial service last October. Maloney mentioned his personal tour of ground zero and how he was moved by the aftermath he witnessed. As a soloist on tin whistle, Maloney introduced "I Am Asleep And Do Not Wake Me/Song Of Hope" in dedication to the heroes and families affected in the aero-attacks.

"Before you take up a job, you should find out something about the character of your employer", were the words of advice from Kevin Conneff, prefacing his solo performance of an amusing Irish farmhand tale. "The Salt" is a humorous limerick of an Irish farmer who has a run of back luck with livestock on his farm.

The Chieftains performed a quirky instrumental version of the 1956 Elvis Presley hit "Heartbreak Hotel", featuring a guitar solo from Jeff White. Within the medley of songs that closed the first set, during "The Rocky Road To Dublin", which was originally recorded with guest members of the Rolling Stones, the band inserted an instrumental movement of "Satisfaction".

The beautiful redheaded vocalist, Allison Moorer, came out on stage to sing "The Moonshiner". She stated she had never played in Baltimore before and enjoyed touring with The Chieftains. She then launched a cappella into "Carrickfergus" after a harp intro by Bell. The depth and projection of her vocal performance was simply amazing.

The last song of the evening, "Cotton-Eyed Joe", was one long Irish jam, infusing music with motion in an entertaining display of outstanding musicianship. As each musician played a solo, Maloney interjected several humorous ad libs during the closing number, including a few toots of "Popeye, The Sailor Man".

All of the traditional dancers rotated their appearance on stage to accompany the encore production of "Do You Ever Go A`Courting Uncle Joe Uncle Joe". The montage of sight and sound was a colorful presentation as the folk dancers kicked in unison. The appreciative audience offered enthusiastic encouragement by clapping along in time to the exciting music.

Following the performance, Paddy Maloney named titles for many of the pieces performed by The Chieftains. I asked Maloney about his studio tenure with Paul McCartney from Tuesday, December 9, 1980, the morning after John Lennon was assassinated. He recalled the somber mood in the recording studio with McCartney and album producer George Martin.

McCartney had been besieged by the media and decided to find solace in work. The track they recorded that day was a McCartney/Laine composition "Rainclouds". The rousing song is only available as a vinyl 45 B-side to "Ebony And Ivory", issued in 1982 as a single. This wonderful outtake is from the Tug Of War sessions. It is the last song on which Wings founder, Denny Laine, shared publishing credit and is a powerful swansong after a decade of partnership.

The Chieftains, issued in 1963, was their first album. Chieftains 2 did not appear until 1969. Throughout their career, The Chieftains have welcomed many top artists to record with them including the Rolling Stones, Elvis Costello, Roger Daltrey, Marianne Faithful, The Corrs, Sting, Diana Krall, Sinead O'Connor, Mick Jagger, and the list continues. The Long Black Veil, their best selling disc from 1995, scored an award for Best Pop Collaboration with Vocals for "Have I Told You Lately That I Love You" with Van Morrison.

The Wide World Over is their latest release, collecting many memorable collaborations and premiering three new recordings. The vision, creativity, and commitment of The Chieftains to the history and heritage of Celtic culture empowers this ensemble to entertain audiences all over the world with their unique style, honoring the beauty and diversity of traditional Irish folk music.

A Celebration of Celtic Culture
The Chieftains welcome an Irish Holiday 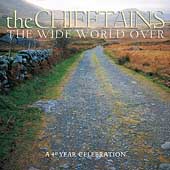