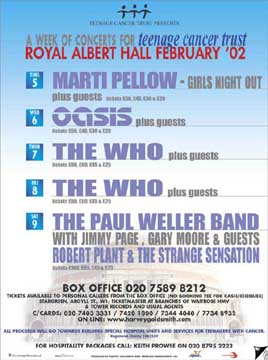 The Teenage Cancer Trust concert series concluded on Saturday, February 9, 2002, with a fifth and final fundraising benefit. Headlining the last charity concert were Gary Moore, Robert Plant & The Strange Sensation, and Paul Weller who was joined on stage by several special guests during his stage appearance.

The Teenage Cancer Trust February 2002 concert week was dedicated to the memory of Simon Francis, August 20, 1964 - February 15, 2001. Invaluable contributions to the T.C.T. will raise crucial capital to continue expanding the critical care units necessary to create a comforting environment for ailing youth across Britain.

Gary Moore opened the evening with his new support band. The three piece unit debuted on stage at the Royal Albert Hall. The power trio performed six numbers together, closing with a Jimi Hendrix classic "Let Me Stand Next To Your Fire".

Robert Plant followed, supported by his five man band The Strange Sensation. He came on stage dressed like a gypsy statesman. Plant also covered Jimi Hendrix's first hit "Hey Joe", delivered with an odd arrangement including a bridge segue that featured "When The Levee Breaks". Although Plant and Jimmy Page were both billed as appearing at this event, the Led Zeppelin alumni did not appear on stage together.

Paul Weller and his band delivered 19 numbers in their set. He welcomed Noel Gallagher of Oasis, Kelly Jones of the Stereophonics, and Collen Anderson as guest performers, appearing with his band. Weller, formerly with The Jam, performed on various instruments including electric guitar, acoustic guitar, piano, keyboards, and harmonica.

As an encore of the evening, Jimmy Page came on stage to jam with Weller's backing band on "Dazed And Confused". Page even treated the Royal Albert Hall crowd to a violin bow solo. The finale featured Roger Daltrey on stage with Weller for a rock solid rendition of the 1967 Who classic, "I Can See For Miles".

Roger Daltrey has been both a major vocal and organizing force behind the campaign to raise funds for hospital units in Britain to treat the nation's terminally ill teenagers diagnosed with cancer. Outside before the concert commenced, I said hello to Roger Daltrey as he was entering backstage. This February 9 concert was a very English affair, leaving many American members of the audience fidgeting in their seats.

Paul Weller setlist: Whirlpools End * Into Tomorrow * Didn't Mean To Hurt You * Peacock Suit * Out Of The Sinking * Sunflower * Picking Up Sticks * Fortunes Drive w/Colleen Anderson * Remember How We Started w/Noel Gallager * Man In The Cornershop * One Way Road * Holyman * Wild Wood * Stanley Road * You Do Something To Me * Heavy Soul * Changingman * Woodcutters Son * Broken Stones * Malice + Splinters * I Can See For Miles w/Roger Daltrey