The defiant Dixie Chicks came to roost on stage at the MCI Center in Washington, D.C., on Wednesday, June 25, 2003. The trio were the center piece of a multimedia high-tech stage presentation supported by a talented team of backing musicians.

Robinson's banjo intro began "Long Time Gone" with support from Maines on acoustic guitar. The jamboree-style tempo motivated the crowd to sing along on the chorus. During the military-themed ballad "Travelin' Soldier", the sisters showcased a dobro solo and a fiddle solo with accordion accompaniment.

"Hello Mr. Heartache" was spiced up with a honky tonk bounce in the beat. Maines and Robinson danced together during a dual fiddle solo. The humorous "White Trash Wedding" featured stand-up bass on the double-time tempo with the band all clustered together on the platform area.

Dedicated to Andrew by Maines, she sang "Godspeed (Sweet Dreams)" with only a mike seated center stage. Their cover version of Fleetwood Mac's "Landslide" was one of the high points of their performance, supported by a small string section assembled on a raised platform. Maines sang on a miniature revolving stand.

The C&W-flavored "Ready To Run" was anchored by strong electric bass notes. A male tossed red heart briefs inscribed with a message on stage, which Maines held up for display. A Texas wind tower appeared on stage as a prop for "Wide Open Spaces". During the popular tune, Maines played acoustic guitar, and the crowd joined in on the chorus.

For their encore, all three Chicks sang harmony on an intense production of "Top Of The World". The string section added a beautiful lift to the mellow ballad. A country jam ensued on "Sin Wagon", spotlighting Maines on electric guitar. Each Chick took a solo on their individual instrument while the crowd clapped along in time. The release of red and gold streamers coincided with the band's farewell bow.

Erika Bergsagel, 21 from Mount Vernon, is originally from Texas. She was sitting in the sports bar with her party on the second level when she was approached with, "Are you familiar with the chicken coup?", and handed a card to trade in for access to the exclusive women-only Chicken Coup pit section on the MCI floor.

Bergsagel thought her view from the Chicken Coup was awesome. She stated, "I liked how they changed the scenery". She had never seen the trio before and commented that their backing band aided the Chicks overall sound.

Michael Green, 40 from Prince William County, is a loyal Bush fan who attended the concert with his family. Green was bothered at first by the remark made by Maines in Britain, but has since gotten over it. He felt it was a fantastic show and has all three DC albums.

Formed in 1989, the Dixie Chicks named themselves after a Little Feat track "Dixie Chicken". Laura Lynch and Robin Lynn Macy were part of the original Dallas quartet that busked on street corners. Sisters Martie Maguire and Emily Robinson were later joined by Natalie Maines in 1995. The up and coming talented songbird, Michelle Branch, appeared as their opening act. 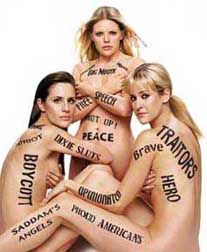