Elation over Elevation Tour
U2 Conquers Quebec with Masterful Musicianship 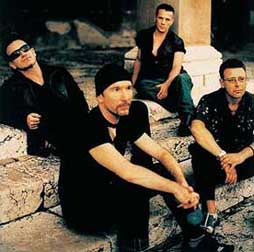 U2 is out on the road in support of their new album All That You Can't Leave Behind. The 2001 Elevation Tour came to the Molson Centre in Montreal, Quebec, on Sunday, May 27, 2001. Vocalist Bono, guitarist The Edge, bassist Adam Clayton, and drummer Larry Mullen, Jr., are the animated components that breathe life into U2 on stage. The band had a unique stage design, encompassing a portion of the front floor section within a heart-shaped stage. Runways looped the shape into a large enclosed heart.

The Irish quartet opened the show with new material in powerful performances of "Elevation" and "Beautiful Day". Bono dedicated "Stuck In A Moment" to the late Michael Hutchence of INXS. The amazing energy level of the band was matched equally by the ecstatic reception they received on stage from the French-Canadian audience.

The band's selection of songs was a strong representation of their impressive catalogue. "Until The End Of The World", "Mysterious Ways", "Sunday Bloody Sunday", and "The Fly" were U2 rockers that really charged the audience. The band was in top form, delivering a first rate performance at the Molson Centre.

Bono and The Edge performed both "Desire" and "Stay (Far Away So Close)" in an acoustic arrangement as though they were buskers on a street corner. "Bad" and "Where the Streets Have No Name" became overwhelming anthems on stage, motivating Bono to race in victory sprints circling across the intimate stage.

A bank of four large video monitors projected individual band images throughout the concert. The house lights and stage lights were alternated in performance for maximum effect. Strobe lighting was also utilized for a twilight ambiance during the set. The lyrics of "Walk On" were splattered within the hull of the arena using modern laser technology. For band introductions, Bono humorously identified band members as Spice Girls.

Bono trotted around the length of the stage perimeter of raised ramps to whip the audience into a frenzy. He also repeatedly lunged like a prize fighter at audience members closest to the stage railings. His provocative actions and wild gestures incited cheers of approval inside the arena. Bono commented the Montreal audience had registered louder than any other venue at that point in the tour.

The excesses of previous U2 tours were absent on the Elevation Tour. The band has made the performance of the music the focus on this 2001 tour rather than the gaudy props and techno wizardry of past tours. U2 once again proved on a Canadian stage why they are considered to be one of the most electrifying acts in concert.

One of Bono's personal endeavors has been the Drop The Debt campaign, lobbying the international financial community to forego third world debt. Blurbs on both Greenpeace and Amnesty International appear in the Elevation Tour program. Characteristically, a handgun propaganda video montage promoting issue awareness was projected over the video monitors as an intro to "Bullet The Blue Sky".

Scalpers outside were preying upon U2 fans like vultures. I scavenged among the singles available held by fans and found a $90 CAN ticket on the lower level that cost me $50 CAN. After conversion, the ticket actually went for around $23 USD. Seeing this prolific band on stage, leaders within the contemporary music scene, is an experience bar none.

Montreal setlist: Elevation * Beautiful Day * Until the End of the World * Discotheque/Staring at the Sun * Mysterious Ways * Stuck In a Moment * Kite * Gone * New York * Out of Control * Sunday Bloody Sunday/Get Up Stand Up * Sweetest Thing * Desire * Stay * Bad/Norwegian Wood * Where the Streets Have No Name * Pride * Encore: Bullet the Blue Sky * With or Without You * The Fly * One/She's a Mystery To Me * Walk On/Hallelujah