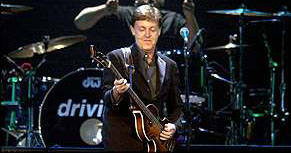 For the second of two nights in Washington, DC, Paul McCartney burned rubber with his Driving USA Tour performance at the MCI Center on Wednesday, April 24, 2002. His band consisted of Paul "Wix" Wickens on keyboards and accordion (and guitar for one song), Rusty Anderson on guitar, Brian Ray on guitar (and on bass when Paul played piano or guitar), and Abe Laboriel, Jr., on drums. All band members sang backup vocals.

The unique, special pre-show presentation began at 8:20 p.m. While the "Auraveda" remix from Rushes, his second 'Fireman' disc issued in 1998, played over the PA system, an peculiar parade of costumed characters walked slowly down the aisles and six clowns carried large helium balloons to the stage from the rear of the arena. Later, these individuals carried six separate colored flags on stage.

The characters included actors dressed an 18th-Century Frenchman, court jesters carrying balloons, a female contortionist, a man on stilts, a woman balancing on a giant rolling ball, a circus strongman with barbell, three golden female Roman statues, a Spanish dancer, and a Chinese swordsman. The screen behind the stage showed beautiful images of Roman ruins and then an open forest.

After 20 minutes of choreography performed by these characters on stage and in the aisles, a huge silhouette of Paul holding up his Hofner bass guitar appeared on a large screen. As the screen rose, there stood Paul, wearing a red, long-sleeved, button-down shirt with white sports coat and black pants.

After "You Never Give Me Your Money/Carry That Weight", Paul played soothing keyboard music and joked, "It's now time for your massage." McCartney delivered a monologue on massages he has received from around the globe. He mentioned a New Orleans message in which the masseuse told him to envision he had a hollow bronze leg and the neck of a giraffe. The masseuse asked Paul how he felt, and he responded, "Like a giraffe with a hollow bronze leg."

He then mentioned a massage in Tokyo where an older woman started singing "Yesterday" with a high-pitched, Japanese accent. The crowd laughed when he imitated her voice. Paul said he was grateful that she didn't know the middle eight!

Many songs were accompanied by sophisticated video presentations. During "Freedom", a total count of 40 screens (one large screen blocked by the banner, three rectangular screens, & 36 smaller square screens) displayed the stage action.

During "Something", the screens showed images of George Harrison during and after his Beatles' days. A photo of George with comic eyeballs drew laughter. Other photos showed George with Eric Clapton and another with John Fogerty. Paul explained that the Ukulele he played during "Something" was given to him by George. He also said that George used to hand out ukuleles after dinner and invite everyone to join in.

After "C Moon", Paul explained that the inspiration for the song came from "Wooly Bully" by Sam the Sham & the Pharaohs. In "Wooly Bully", there's a line that goes "Don't be an L7", which means don't be a square (he used his hands to show how an L next to a 7 looks like a square). He said that he wanted something that was the opposite of square, and came up with "'C Moon" to represent 'cool'.

Paul used one hand to make a 'C' and the fingers of his other hand to make a crescent moon beside the 'C'. Unsure as to how this represented 'cool' (it looked like 'co' to me), the rest of the audience seemed to get it. McCartney joked that he had just explained an important part of rock history.

After the final encore set, Paul autographed an album and threw it back into the audience. One has to wonder whether the owner ever got their album back. McCartney chose a group of unknown musicians to support him on his 2002 tour except for Wix Wickens, a former tour companion from `90 & `93.

Paul was in great voice and spirits, and he put on a wonderful show performing for 2 1/2 hours. He seemed relaxed and appeared to have a great camaraderie with the band. It was thrilling to see this living legend in person! McCartney's performance instrument changes are indicated in parenthesis and refer to each instrument he played for that particular song.