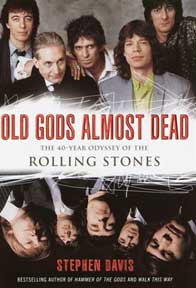 Stephen Davies, author of Old Gods Almost Dead published by Broadway Books in December 2001, paints an unpleasant image of the modern Rolling Stones as a band that has been recording all of their recent albums, since 1986's Dirty Work, as two factions that cannot cooperate in the same studio.

Old Gods Almost Dead: The 40-Year Odyssey Of The Rolling Stones would have the reader believe the Stones are a bunch of dysfunctional, egocentric, co-dependent substance abusers with no redeeming qualities even as musicians. Depicting a dark saga of a four decade success story cannot be the only avenue to present their rise from obscure trad jazz clubs to international stardom.

What more can be possibly be written in print about a band that has been obsessed over in prose by countless biographers, groupies, ex-lovers, ex-managers, ex-dealers, music critics, fans, and even band members themselves. The global village is desperate for yet another tome of a rocker in a leather jacket!

The black & white photos utilized within four sections throughout the book are not even interesting in their own right. Mostly uninspired, familiar pictures, many are mislabeled with inaccurate titles misidentifying them. How much research or thought was invested in selecting these photographs? There are plenty of forgotten photos that could have been included in this publication to enhance its visual appeal.

Lurid details of the band members fighting in private, bickering in the studio, and inappropriate conduct is really unnecessary. One has to wonder how the Glimmer Twins function together on stage if they cannot communicate off tour? With mega-millions at stake from each successive tour, the only thing that propels the modern Stones to function is earning more sums of performance capital. Davis misses the resiliency of this veteran British Invasion band completely.

One major problem that erodes the credibility of the author is the amount of factual errors that pile up in this book page after page. Getting crucial dates wrong means one did not do the necessary homework or conduct thorough research. One has to ask if Davis was just sloppy or relying on mostly flawed secondhand material when writing this book.

The Rolling Stones as a group may be hitting 40 but collectively, their individual ages add up to 230 (not counting retired Bill Wyman or departed Mick Taylor). Established in 1962, these prolific warhorses have made a lifetime career, performing in an industry that has a life expectancy warning label attached to it.

One major obstacle facing the Stones in 2002 is the outright disaster of Jagger's solo album, Goddess In The Doorway, from November 2001. Virgin Records quietly released Jagger from his recording contract. Ironically, 'Goddess' was a phenomenal album, but was essentially ignored by the international music-buying public. A massive blow to Jagger, but the material on that disc is some of his best work regardless of the fact that it failed to chart.

During the course of their staggering career, the Rolling Stones have toured the United States 14 times. LBJ was President on June 5, 1964, when the original quintet debuted on an American stage at the Swing Auditorium in San Bernadino. Their latest U.S. performance was at the San Jose Arena on April 20, 1999.

The Rollin' Stones were an R&B combo formed by guitarist Brian Jones and pianist Ian Stewart. These American blues enthusiasts would be joined by Mick Jagger, Keith Richards, Bill Wyman, and Charlie Watts. Together, this unit would be discovered by Andrew Oldham who would secure them a recording contract with Decca Records, launching their 40 year career.

The Rolling Stones are a musical institution. Their R&R model will never be repeated. Their story may not be pretty at times, but it has always remained honest. The Glimmer Twins created a soundtrack that continues to play in the background of old followers and new fans year after year. It's a shame Davis could not touch on the phenomenon of their on going popularity; rather than the indiscretions and scandals revolving around the members of the World's Greatest Rock'n'Roll Band.