Rock Save the Queen
Celebrating Her Majesty's Golden Jubilee 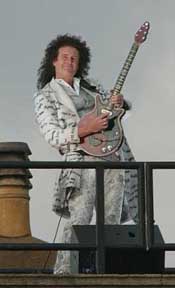 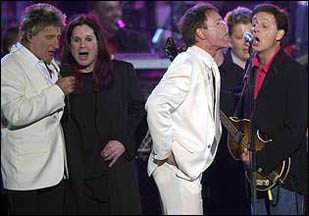 Rock'n'Roll rocked Buckingham Palace in London on Monday, June 2, 2002, as the Queen of England celebrated her Golden Jubilee with 50 years on the British Throne. The Beatles' 1967 Flower Power anthem written by John Lennon, "All You Need Is Love", was promoted as the theme song of Queen Elizabeth's Golden Jubilee festivities.

VH1 premiered an edited broadcast of the Queen's Jubilee: Party At The Palace on Sunday, June 9 at 9:00 p.m., which was limited to two hours of edited footage. Many invited artists on the bill were left out of the condensed program. VH1 should have expanded their program to a three hour format to include more of the stellar performances.

12,000 revelers were selected by lottery to attend the mega-star pop concert in the royal gardens of Buckingham Palace as Golden Jubilee celebrations reached a climax. Another 150,000 had gathered in the vicinity of Buckingham Palace. Large video screens were erected to project the performance in nearby public parks. Younger Royals, including Prince William, 19, Prince Harry, 17, Princess Beatrice, 13, Princess Eugenie 12, Zara Phillips, 21, and Peter Phillips, 24, attended the Golden Jubilee musical presentation.

A quick clip of Sir Paul McCartney playing the premiere performance of "Her Majesty" on solo acoustic guitar was aired at the very beginning of the Jubilee program. "I just had to do it", was Macca's quip with Queen Elizabeth II and the Duke of Edinburgh in the royal viewing box. This was the first of several unnecessary editing errors committed by VH1 producers.

Queen guitarist Brian May appeared atop Buckingham Palace to perform an electric guitar solo during the British National Anthem. His roof top guitar jam was truly an incredible moment to launch the Party at the Palace concert. Eurythmics singer Annie Lennox sang "Sisters Are Doing It For Themselves And Why" with several backup vocalists supporting her.

The mighty Queen, as they were introduced on stage, were represented by guitarist Brian May and drummer Roger Taylor. The two were supported by the amazing Palace band. Taylor sang lead vocals on "Radio Ga GA", a song he composed. Brian May handled the vocals for "We Will Rock You", which he wrote.

In a curious move, Sir Elton John recorded his performance on piano in the Music Room of Buckingham Palace. Unlike all of the British music legends that played classic rock material, he chose to sing his 2001 single, "I Want Love". Sir Elton, on tour in Germany, taped his appearance for the Golden Jubilee concert.

Ozzy Osbourne made a very humorous entrance, appearing before his completed introduction. He actually screeched coming out on stage. The Ozzmeister was joined on stage by Black Sabbath guitarist Tony Iommi. Their musical reunion was well received as they performed a fast-tempo version of the 1971 Black Sabbath classic, "Paranoid". Ozzy was animated, dressed in black, and closed his moment with a fireworks display.

Beach Boys mastermind Brian Wilson sang his masterpiece, "Good Vibrations". Dressed in a coat and tie behind an organ, he was joined on stage by a massive support band. Hitting a few sour notes, Wilson led the audience in a sing-along during the final bridge of his international smash single.

A pan to the Royal Box showed everyone rocking to the Beach Boys' 1966 classic. Sir Cliff Richard sang harmony vocals with Wilson. The arrangement featured a micro-drum solo inserted at the close of the tune. An extended outro spotlighted the soaring Theremin solo on the original recording.

Eric Clapton performed his signature masterpiece, "Layla", from his stint with Derek and the Dominos. Exquisitely dressed in black, ole Slow Hand tore into this 1970 classic with passion. The Palace symphony supported Clapton's electric guitar solo on the orchestral coda with percussionist Ray Cooper banging on a gong.

Seated behind a piano, Steve Winwood turned in a spirited take of a 1966 hit single he sang with the Spencer Davis Group. "Gimme Some Lovin'" was welcomed by the Palace audience. Rod Stewart reached back into his timeless catalogue of material to perform a beautiful rendition of "Handbags And Gladrags", first recorded in 1969. Corrs violinist, , performed as part of a string quintet.

Joe Cocker was joined by many of his friends to sing the Sgt. Pepper classic, "With A Little Help From My Friends". He immortalized his own version of this Beatles anthem in 1969. Kinks composer Ray Davies, wearing a Union Jack jacket like his earlier Mod days, was a major surprise on the Palace bill. He performed his 1970 hit single, "Lola", on acoustic guitar with vocal participation from the Palace audience, generating a smile from the Queen.

Sir Paul McCartney closed the Party at the Palace. With his songs edited improperly out of sequence for broadcast, Macca's set began with the medley, "Sgt. Pepper's Lonely Hearts Club Band"/"The End". McCartney played electric guitar and dueled in a guitar jam with his two bandmates, which featured a strong drum solo.

Sir George Martin appeared on stage to deliver a brief eulogy of the late George Harrison. He mentioned the famous 'tie vignette' and introduced Eric Clapton. Clapton reprised his lead guitar solo, performed on the original recording of "While My Guitar Gently Weeps", a classic Harrison composition. The moving tribute was performed with Clapton on lead vocals and McCartney on harmony vocals and piano.

Opening the song instead with the British National Anthem, "All You Need Is Love" featured Rod Stewart on vocals, followed by Joe Cocker on the second verse, and Paul McCartney on bass, handling the last vocal passage. With Brian May on electric guitar, Ozzy Osbourne, Cliff Richard, Rod Stewart, and Brian Wilson joined in on backing vocals.

The symphonic accompaniment was just wonderful. As the song began to fade, McCartney belted out the classic Beatlemania lyric "She loves you, yeah yeah yeah". He probably hasn't sang the 1963 chart-topping chorus since the live 1967 "All You Need Is Love" broadcast with John Lennon.

Sir George Martin escorted Queen Elizabeth II out on stage to review the artists assembled for her Golden Jubilee. Prince Charles' delivered an address in honor of his mother's half century on the British throne. Sir George rallied the audience to commence three cheers for the Queen in a sea of waving Union Jacks.

The program finale was the 1968 Beatles classic, "Hey Jude". Paul McCartney sat behind his piano to lead off the song. He later got up to direct the chorus before returning to his piano seat to end the production. All of the performers joined Macca on stage and sang the rousing chorus. The oddest moment was a shot of Kermit the Frog resting on Tom Jones shoulder singing the coda chorus. Sadly, Sharon Osbourne chat ruined this performance.

Escorted by children, the Queen of England ignited a wire rocket, which lit the National Beacon on the Queen Victoria Memorial. A fireworks display above Buckingham Palace commenced to close the fabulous evening of song and celebration. The Golden Jubilee Beacon chain stretched from the Arctic to the Antarctic across the United Kingdom, the Commonwealth, and 14 other countries around the world.

Her Golden Jubilee Palace Party was a classic rock dream concert with many British musical legends all participating on one spectacular bill. This fantastic Rock'n'Roll lineup was a once in a lifetime extravaganza, commemorating the Queen on her Golden Jubilee. Great Britain's symbol of the royal lion as a icon of imperial strength was presented as holding an electric guitar.

Unfortunately, VH1 basically butchered their Party at the Palace broadcast. Two Paul McCartney performances, "Blackbird" and "I Saw Her Standing There", were both excised from the edited program. During the lone finale of "Hey Jude", VH1 had the nerve to interrupt the song with a clip of Sharon Osbourne muttering unnecessary farewells! Plus, how could they delete "I Saw Her Standing There", Macca's signature Beatlemania anthem?

The in-between clips of Sharon Osbourne running her mouth was simply silly. VH1 obviously signed Mrs. Osbourne to host the program because of the success of her family's cable television program, 'The Osbournes'. In a most ridiculous moment out on the lawn with her husband, she criticized the state dinner she had recently attended at the White House. Her lame interview with Paul McCartney, featuring bleeped comments was utterly uninspiring. 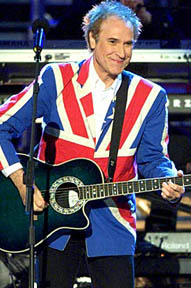 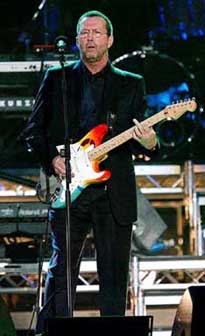