All things must pass as the Rolling Stones ended the North American leg of their Licks World Tour on Saturday, February 8, 2003, at the MGM Grand Garden Arena in Las Vegas, Nevada. This was the Stones' 51st stage appearance over two tour legs, which both closed at the MGM Garden.

Members of the Rolling Stones support band casually strolled into the Garden through the complex corridors prior to the performance. Bassist Darryl Jones was outside the box office window, talking on a cell phone. Saxophonist Bobby Keys and back-up singer Bernard Fowler were escorted by an entourage of Stones fans into the venue.

The Las Vegas audience proved to be an exceptional audience, possibly the loudest crowd on the tour. The Stones chose their 1981 hit single, "Start Me Up", to launch their final American performance. The Garden were up on their feet as Ron Wood ripped on his intense guitar solo.

Mick Jagger mentioned, "Monday, we go off to Australia, but tonight is our last date in the US", as he adjusted his electric guitar for "Don't Stop". Wood was animated for his Ronnie-Cam guitar solo. Dual saxophones were featured in "Monkey Man". Chuck Leavell added his support on the piano.

Richards imparted his precious remarks, "I've forgotten to blush", in reference to his reception. "I'll play anywhere; let's see what's on the menu tonight!", was another choice comment. Richards delivered a strong vocal for his solo intro on his power ballad "Thru And Thru". Afterwards, he alluded that the Stones were looking forward to returning to play future gigs in the U.S.

The band was on fire for "Sympathy For The Devil". The Glimmer Twins created sparks on stage together; Jagger's falsetto vocal and Richards' chirping guitar solo were both outstanding. Lisa Fisher sang the harmony intro to "Gimme Shelter" solo as Leavell added keyboard accompaniment. Jagger and Fisher belted out a solid duet during the bridge.

Richards fired up "Can't You Hear Me Knocking". Charlie Watts came alive behind the skins on this rare rocker. Keys' saxophone solo, Jones' bouncing bass lines, and Jagger's harmonica solo pumped up the power of this number. In his showcase moment during the concert, Wood pushed his guitar abilities to another level on his intense extended solo; the standout jam of the evening.

The ultimate Stones classic, "Satisfaction", rocked the Grand Garden Arena. Their incendiary version sent the audience into wild abandon. Richards nailed his lead guitar solo, Leavell banged out the melody on the organ, and Watts pounded out the beat in a frenetic display of musical endurance.

A rockier rendition of "You Got Me Rocking" lead off the B-stage assault. The audience sang along for "Like A Rolling Stone" with Richards and Leavell singing harmony vocals. Joining the band on the intimate stage, Keys played his sax solo on an intense workout of "Brown Sugar".

The group bowed and exited through the crowd. The band returned for their encore with an electrifying stage romp through "Jumpin' Jack Flash" as red paper petals showered upon the crowd. Richards stroked the final lick of the evening on his electric guitar as Fisher scooped up several setlists once the music stopped.

Collectively, the entire entourage of musicians participated in a bow before the audience. Then, the four principal Rolling Stones stood alone together on stage for their final moment on their Licks Tour before an American audience. Their second Las Vegas Garden concert ended the Winter leg on a high note.

Las Vegas setlist: Start Me Up * Street Fighting Man * It's Only Rock 'n Roll * Don't Stop * Monkey Man * Let It Bleed * You Can't Always Get What You Want * Midnight Rambler * Tumbling Dice * introductions * Thru And Thru * Before They Make Me Run * Sympathy For The Devil * Gimme Shelter * Can't You Hear Me Knocking * Honky Tonk Women * (I Can't Get No) Satisfaction * You Got Me Rocking (B-stage) * Like a Rolling Stone (B-stage) * Brown Sugar (B-stage) * Jumpin' Jack Flash 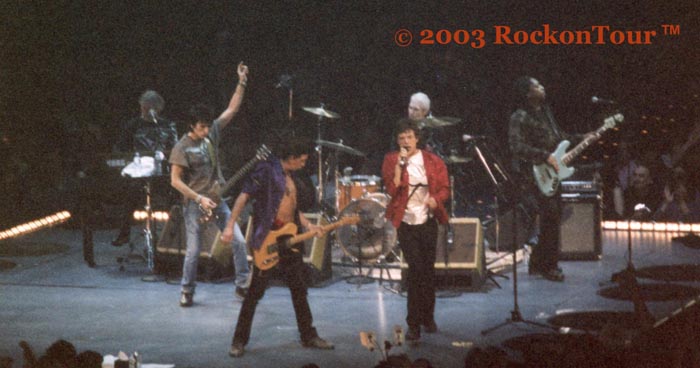