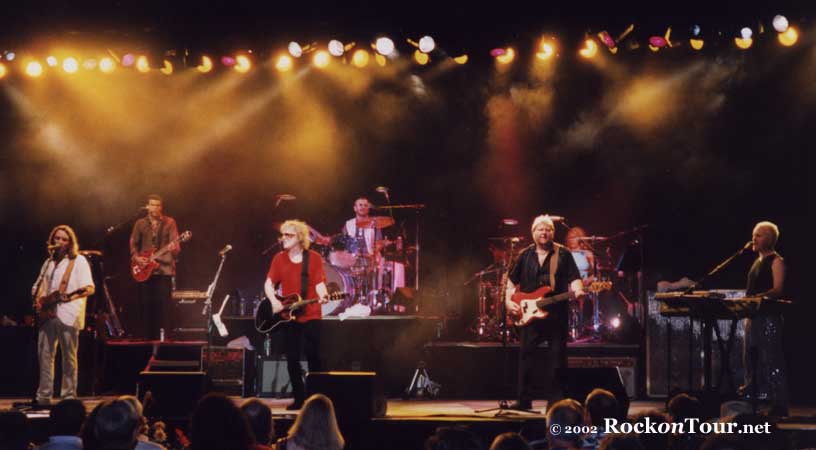 Wow! Have fans been waiting for this All Starr Band tour. This seventh incarnation of the All Starr Band rivals the second band from the 1992 tour. Ringo's 7th All Starr Band performed at the Riley Rink in Manchester Center, Vermont, in the Hunter Park complex on Sunday, August 5, 2001.

The 2001 All Starr Band consists of Sheila E. on percussion from Prince and the Revolution; Roger Hodgson on guitar and piano from Supertramp; Ian Hunter on guitar and piano from Mott The Hoople; Howard Jones on keyboards; Greg Lake on bass from Emerson Lake & Palmer; and saxophonist Mark Rivera returns for his fourth tour as Musical Director. The band leader is dear ole Ritchie Ritch on drums!

This performance by the All Starr Band was a charity fundraising event. Front row seats were sold at $1,000 a ticket. Second row seats went for the reasonable price of only $250 a ticket. The Riley Rink acts as both an indoor pavilion with outdoor lawn seating. It was a very intimate setting to see Ringo, but it was also very hot underneath the roof inside. Ringo struck humorous poses as fans came up to the stage to take photos of him.

This All Starr Band delivered 26 numbers altogether, which has to be the longest Ringo concert I have seen. Ringo announced there would be no encores and commenced to play three of his songs that would have made up their encore. This new line-up rocked the audience and was really refreshing after the `97, `99, and `00 All Starr Tours. Each vocalist was impressive, performing their individual songs.

Roger Hodgson related a story about the composing history behind "Give A Little Bit" being inspired by John's "All You Need Is Love", and thanked Ringo for this. Having last seen Supertramp on their 1983 farewell tour, it was nice to see Roger live again. Greg Lake was joined by Sheila on drums and Howard on keyboards for a sizzling rendition of "Karn Evil 9" during his performance.

One positive change was that Ringo spent much more time behind his drums than he has on previous tours. He may have been motivated by the fact that he had his first female in the band on percussion. Sheila E. only sang two songs, but for her second number she came out to bang on a free standing drumkit and proceeded to tease Ringo with pulling back from striking the skins several times.

Sheila even stopped mid-song to pose for a picture with a male member of the audience who was standing close to the stage. She then invited a young girl up on stage to hold her drumsticks and play to the applause of the audience. Ian Hunter delivered several spirited rock'n'roll hits. Howard Jones performed many of his popular `80's radio chart toppers.

Ringo's best songs for me were "Photograph" which is a great opening number, "You're Sixteen" (being sung by a 61 year old!), John's `73 classic "I'm The Greatest", and the humorous "The No-No Song". His drumming on "Back Off Boogaloo" and "I Wanna Be Your Man" was a tremendous treat.

"It Don't Come Easy" and the Sgt. Pepper classic "With A Little Help From My Friends" were two of the displaced encores that were great closing numbers. The major disappointment again was no "Octopus's Garden" nor "Don't Pass Me By"!! Here's hoping Ringo brings another All Starr Band tour out on the road in 2002! Thanks Ringo!