The Rolling Stones jammed on an intimate stage before some 3,000 + ecstatic fans on Sunday, September 22, 2002, at the Tower Theater in Upper Darby, Pennsylvania. The Stones wove their classic hits with obscure tracks and cover songs in an amazing evening. This was the band's third club gig out of six scheduled theater dates on their current Licks World Tour.

Violet lights lit up the stage as a voice over the Intercom introduced the show as the final night of a Philly concert trilogy. A single spotlight was cast upon Keith Richards as he appeared on stage and played the opening chords to "Jumpin' Jack Flash" on his electric guitar. The Stones were animated as the band rocked with a dedicated passion.

The inclusion of their 1994 single "You Got Me Rocking", was one of two modern Stones songs to make the Tower cut. Richards' guitar solo and Ron Wood's bottleneck lead sizzled. The "Hey!, Hey!" lyric got the house singing as Mick Jagger turned in a strong vocal.

Richards tore into "Hand Of Fate", from Black And Blue. Jagger encouraged Wood's guitar solo by calling out, "C'mon Ronnie!". The classic, "No Expectations", represented their first dip into their colorful past. Jagger played acoustic guitar and Wood played dobro seated on a stool. Charlie Watts exhibited his impeccable timing behind the skins, which generated the cool groove the band had going for this Beggars Banquet ballad.

The band reached deep back into their catalogue to dust off the power ballad "Heart Of Stone". Slowed down slightly, the chorus was supported by audience participation. This song was originally released as an early U.S. Glimmer Twins single in November 1964. Another cover, "Going To A Go Go", was a 1981 tour staple that was vastly improved by horn embellishment. The Stones rhythm section was dead-on tight together.

"This is a Philadelphia tune", was Jagger's introduction for "Love Train". The crowd immediately in front of the stage began dancing . Michael Davis provided a trombone solo, Chuck Leavell added a spirited organ passage, and Chaplin aided the rhythm with electric guitar.

During introductions, it was noted that backing vocalist Lisa Fisher was ill and not present with the band at the Tower Theater. "We don't have Lisa tonight. Lisa got sick tonight, and Bernard would not wear the red dress", was Jagger's humorous comment on the subject.

Richards' greeted the enthusiastic fans, "Hey Philly, it's been a great week for us. ... Always good time, you know". Despite a slight misfire on his guitar intro, Richards delivered a strong vocal on his 1978 classic, "Before They Make Me Run" with the horn section adding impact to the performance.

Again, Jagger changed one little word in the lyric to "It's Only Rock'n Roll". One has to wonder if the fans ever pay attention enough to hear something like, "I bet you think that you're the only pussy in town", which is absolutely hilarious.

The politically incorrect "Stray Cat Blues" cranked with Richards' chugging guitar intro. Jagger delivered an outstanding vocal. He aged the original lyric by one year and sang, "I can see that you're 16 years old", in another classic rocker from Beggars Banquet. Darryl Jones eased in a bass solo segue followed by an intense guitar coda by the six-string slinging duo of Richards and Wood.

The Licks Tour has been blessed with stellar performances of "Can't You Hear Me Knocking". This song featured several instrumental peaks as band members received cheers and applause for their individual musical contributions. Keys added Sax, Jagger added harmonica, and Wood ripped on his guitar solo with Jones anchoring the jazz jam with his fluid bass lines.

Richards flubbed his guitar intro for "Start Me Up", but the band quickly recovered. Jagger leaped about on stage, intensifying the excitement level. Both Chaplin and Fowler abused their tambourines during this great live version. Again, Richards struck a resounding guitar chord to launch "Brown Sugar" as red paper petals were released above the audience.

The evening ended with "Tumbling Dice", which has been repeated as a club encore. Richards made his characteristic stage entrance igniting the intense version with his chirping guitar intro. Jagger tossed a cop of water onto fans, delivering one of his strongest lead vocals of the performance. The horn section shook up the groove as Wood and Watts added punch and power to a fantastic crescendo.

Rolling Stones fans are ecstatic the band is making club appearances during their 40th Anniversary Tour. Tickets have been reasonably priced, but are extremely hard to obtain. Catching the Stones jam live in an intimate theater setting is truly a unique experience that cannot be exaggerated. Their few club dates are the hottest tickets in demand. The Stones aren't getting older, they're only getting better. 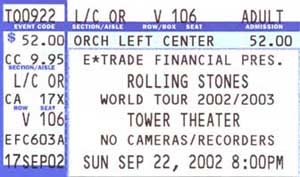 Tower Theater setlist: Jumpin' Jack Flash * You Got Me Rocking * Sad Sad Sad * Hand Of Fate * No Expectations * Hot Stuff * Everybody Needs Somebody To Love * Heart Of Stone * Going To A Go Go * Love Train * introductions * Slipping Away (Keith) * Before They Make Me Run (Keith) * It's Only Rock'n Roll * Rocks Off * Stray Cat Blues * Can't You Hear Me Knocking * Honky Tonk Women * Start Me Up * Brown Sugar * Encore: Tumbling Dice

Special Thanks to Corrie

Stoned in a Theater
An intimate date with the Rolling Stones