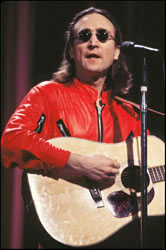 John Lennon did not make many stage appearances during his short solo career after departing The Beatles. However, Lennon's final performance before a live audience is largely forgotten today. Lennon appeared at the Waldorf Astoria Hotel on April 18, 1975, to perform on "A Salute to Sir Lew Grade", supported by Dog Soldier.

On this television special, Lennon performed "Slipping and Sliding" and "Stand By Me", both from his latest release, and his most popular solo composition, "Imagine". He wore a unique 'two-faced' mask he had designed to project his true feelings of Sir Lew Grade. Sculptor Ruby Jackson created masks for Lennon and his backing unit especially for this television production.

"Incantation" is a 1975 recording performed by Dog Soldier with Patrick Jude on lead vocals. Lennon aided in the production and composed the lyrics. Lennon's inspiration for the lyrics came from an Indian he had met named Rolling Thunder. Dog Soldier renamed their band after a Lennon lyric from the song.

Lennon began making solo stage appearances while still a member of The Beatles. His first solo performance was a favor to Mick Jagger when he formed the supergroup The Dirty Mac, performing "Yer Blues" at the Rolling Stones' "Rock'n'Roll Circus". This December 1968 jam was not officially released until October 1996. His first major public appearance was a performance as the Plastic Ono Band at the "Rock And Roll Revival Concert" in Toronto on September 13, 1969.

Lennon staged two charity concerts for "One To One" at Madison Square Garden on August 30, 1972. He returned to the Garden to join Elton John on stage for Thanksgiving Day 1974 because of a musical wager. His September 1974 single "Whatever Gets You Thru The Night" had topped the American pop charts. Together, the duo performed "Whatever Gets You Thru The Night", "Lucy In The Sky With Diamonds", and "I Saw Her Standing There", honoring his promise.

John Lennon had enough in 1975. His album released in February, Rock'N'Roll, had to battle it out in the marketplace against a rogue album of similar material absconded by the producer and sold over television. His battle for a baby with Yoko after several miscarriages would reward them with a child on October 9, 1975. His battle with the United States government over his immigration status would conclude on July 27, 1976, resulting with a green card victory.

The soap opera of turmoil and trauma that had characterized Lennon's 'lost weekend' of estrangement from Yoko Ono was coming to a close. His relationship with Yoko began to rekindle after they reunited backstage at the Garden. Lennon now sober with Yoko pregnant, was ready to forge a renewed life at the Dakota with his new family.

Lennon decided on an extended sabbatical following the birth of his son, Sean Ono Lennon. Rock'N'Roll was his last studio effort, followed by Shaved Fish, a greatest hits compilation for the 1975 Xmas season. With the lone exception of composing and performing on "Cookin' (In The Kitchen Of Love) for Ringo Starr in 1976, Lennon abandoned the public eye altogether.

Approaching his 40th birthday, John Lennon felt the time was right to record again and commenced the Double Fantasy sessions with Ono. Lennon was planing to appear on a Mike Douglas anniversary special in December 1980, ironically being filmed in Hawaii; only he changed his plans. This career move tragically cost him his life. Discussions had been held to launch a world tour in 1981. This all ended with the loss of John Lennon on December 8, 1980.