The Stones Roll in Syracuse
Superior Show at Carrierdome 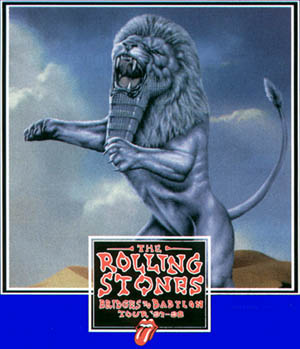 The Rolling Stones performed their final East Coast concert at the Carrierdome in Syracuse, New York, on Friday, April 17, 1998. After being postponed twice, the Stones rolled into Syracuse to complete the first of five North American dates that had to be rescheduled from early January.

And was it worth the wait! The Rolling Stones were at the peak of their performance in Syracuse. As the lights went down and the desert lion roared to life, guitarist Keith Richards stormed center stage and held his ground to entice the audience before launching into the classic guitar intro of "Satisfaction". It may be 37 years old, but the Stones' national anthem never sounded so compelling. And satisfaction is what the band delivered in its 22-song set.

"Let's Spend The Night Together" was one of five songs from the 'Brian Jones era' the band performed. "Gimme Shelter" featured a sizzling vocal solo from Lisa Fisher. "Bitch" introduced the horn section that accompanies several of the numbers. Mick Jagger played both acoustic and electric guitars and harmonica on a few songs during the set.

"Saint Of Me", their second single from Bridges to Babylon, featured a quiet intro by Mick on acoustic guitar and ended with tremendous applause from the audience. "Out Of Control", the next anticipated single, spotlighted a blistering duel between Mick on harmonica and Keith on lead guitar that also generated enormous applause.

A highpoint on the B2B tour each night was a special song fans from around the world could vote for the Stones to perform via an internet poll. The winning song selected for Syracuse was the notorious "Star Star", from 1973's Goats Head Soup, featuring back up vocals from Ron Wood during the chorus.

Keith Richards sang two numbers for his micro-set. "You Don't Have To Mean It" featured Ron Wood on keyboards; a reggae song from their 1997 studio album. Next, Richards rocked on "Wanna Hold You" from 1983's Undercover. Keith's vocals were delivered in his raspy heartfelt-style as the horn section added embellishment to both songs.

A dramatic moment during their concert was the arching bridge that rose above the crowd, allowing the band to reach an intimate stage in the center of the floor to generate audience excitement. Each night, the Rolling Stones jam up-close and personal, delivering three choice rockers on the B-stage.

Syracuse received "Little Queenie", "The Last Time" and "Like A Rolling Stone". The final selections of the concert comprise classic Rolling Stones songs: "Sympathy for the Devil", "Tumbling Dice", "Honky Tonk Women", "Start Me Up", "Jumpin' Jack Flash", with two encores; "You Can't Always Get What You Want" and "Brown Sugar".

After having been on tour for seven months, the Rolling Stones delivered these songs with precision and power that reminds everyone why they are called "The World's Greatest Rock'n Roll Band". The original members remaining are vocalist Mick Jagger, guitarist Keith Richards, and drummer Charlie Watts. Ron Wood joined the Stones as second guitarist on their 1975 U.S. tour.

Saxophonist Bobby Keys has played on Stones albums since 1969; resident keyboardist Chuck Levell has been a fixture since the Stones triumphant 1982 European tour; and back-up vocalists Lisa Fisher and Bernard Fowler have both been on board since the 1989 Steel Wheels tour. Blondie Chaplan is the newest addition to the B2B touring unit.

Road tripping for a Rolling Stones concert is always an adventure. The jaunt to Syracuse paid off as the best concert out of all of 11 performances on that US tour. Having scored 20th row seats in the center isle next to the catwalk was incredible. Seated about half way in between the main stage and the B-stage was an outstanding floor position. Plus, the individual who sold us the tickets gave us guest passes to attend the Carrierdome Press Box Hospitality Suite prior to the performance.

The 40-year-old British band is an institutional legend, performing better with each passing tour. The Bridges to Babylon Tour was their 13th tour of the United States. However, the Rolling Stones have only recorded 21 original studio albums during their career. Can't wait to see the lads open their 40th anniversary tour in Boston later this Fall!

Syracuse setlist: Satisfaction * Let's Spend The Night Together * Flip The Switch * Gimme Shelter * Sister Morphine * Bitch * Saint Of Me * Out Of Control * Star Star (Internet selection) * Miss You * introductions * You Don't Have to Mean It (Keith) * Wanna Hold You (Keith) * Little Queenie (B-stage) * The Last Time (B-stage) * Like A Rolling Stone (B-stage) * Sympathy For The Devil * Tumbling Dice * Honky Tonk Women * Start Me Up * Jumpin' Jack Flash * Encore: You Can't Always Get What You Want * Brown Sugar