Ringo & His New All-Starr Band was recorded during a 2001 U.S. tour. Ringo's seventh incarnation of his All Starr Band comprised Sheila E. on percussion (Prince and the Revolution); Roger Hodgson on guitar & keyboards (Supertramp); Ian Hunter on guitar & keyboards (Mott The Hoople); Howard Jones on keyboards; Greg Lake on bass (Emerson Lake & Palmer); and saxophonist Mark Rivera at the helm on his fourth tour as Musical Director.

Performing their own individual solo songs, each artist contributed to the collective versatility of the All Starr Band. Starr leads off the disc with the concert opener, "Photograph". This third live version has a slightly faster tempo, but remains one of Ringo's best compositions co-written with the late George Harrison. Rivera's saxophone cuts through the mix, soaring above the chorus of backing vocals.

Supertramp superstar Roger Hodgson turns in three performances. "The Logical Song", spotlights his lead vocal and keyboard playing. Once again, Rivera lays down another strong saxophone solo. Howard Jones is represented with his mellow chart topper, "No One Is To Blame", showcasing his melodic voice.

Hodgson checks in again on acoustic guitar with his jaunty composition, "Give A Little Bit", which was actually inspired by "All You Need Is Love". Rivera's sax blasts embellish this track as a concert highpoint. Only Ringo, at 61 years old, can get away with singing "You're Sixteen". Ringo actually found a young girl celebrating her sixteenth birthday in the audience. This third live recording of his 1973 hit single resembles a cabaret showtune.

The funky percussion and wawa-drenched guitar work on "Back Off Boogaloo" make this second live rendition of Ringo's 1972 chart topper interesting. The artist attraction on the 2001 tour was the addition of the All Starr Band's first female, Sheila E. Her spirited performance on "Glamorous Life" had Ringo calling Sheila back to reprise her percussion jam.

The fast-paced "Don't Go Where The Road Don't Go" must be a personal favorite of Ringo's because this is it's third time live. The Sgt. Pepper classic "With A Little Help From My Friends", a perennial encore, is Ringo's fourth live release of the 1967 Flower Power anthem. The All Starr Band delivered an excellent version of this Lennon-McCartney singalong.

This concert was recorded on August 22nd at the Rosemont Theater in Illinois. All Starr Band fans will enjoy the diversity of this new live collection. The strength rests with the guest performers. Unfortunately, Ringo's live recordings are getting a little stale as he usually repeats the same repertoire live in concert tour after tour.

Ringo Starr recently signed a new recording contract with Koch, anticipating a 2003 studio release. His career benefited with a major boost in popularity from The Beatles Anthology series. His last studio album, I Wanna Be Santa Claus, was a lighthearted 1999 holiday disc. 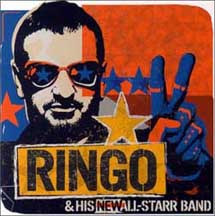