Back In The U.S. is Paul McCartney's fourth official live album. What more does Sir Paul have to prove? On this double disc set, plenty. Macca is in strong form, proving he has the exuberance to go out on the road and rock out with his legion of American fans.

McCartney is supported by a new group of backing musicians. These young and energetic band members, guitarist Rusty Anderson, drummer Abe Laboriel, Jr. and guitarist/bassist Brian Ray, have given Macca's stage act a harder edge. Keyboardist Paul 'Wix' Wickens is the only McCartney tour veteran who had duty on the `89 - `90 and `93 tours.

"Hello, Goodbye" and "Getting Better" are two new Beatles tunes presented live. The classic Wings rocker from Band On The Run, "Let Me Roll It", is treated to its third live version in this collection. Macca also performed "Vanilla Sky", his movie theme song that received a Grammy Nomination.

Sir Paul recorded two special songs on his 2002 tour. He sang "Here Today", which he wrote for the late John Lennon, and "Something", which he sang in memory of George Harrison. Two classic Macca Beatles songs, "I Saw Her Standing There" and "Yesterday", are included as part of his extended encore.

McCartney removed all of his in-between-song chatter, which were interesting vignettes during his performance banter. One drawback is is how the Back In The US tracks have been stitched together. The fading applause of the preceding song bleeds onto the intro of the next number, which is noticeably annoying.

Many of these selections have reappeared over his succession of live albums. With the exception of "Live And Let Die" which is now four for five, most live tracks are now reaching their third live version. With his extensive back catalogue of Beatles, Wings, and solo classics, one has to wonder why Sir Paul is limiting himself to repeating his repertoire.

Disc 2 essentially comprises a suite of repeated material. "C Moon" previously appeared as a CD single bonus track in 1990. This 2002 version of "Freedom" brings its total to three takes as well. Nine songs included in this double set have never been recorded live before on a tour. His last two formal live albums included sound check oddities, of which none were included on this new release. 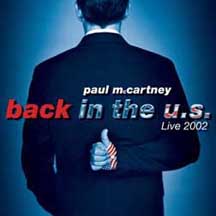