This eclectic collection of songs runs the broadest spectrum of Americana imaginable. His choice of cover material, bar none, is in a zone all of its own. From Elvis Presley's "Are You Lonesome Tonight", AC/DC's "Highway To Hell", and back to Jerry Lee Lewis' "Great Balls Of Fire", Tiny Tim was without doubt, an engaging singer and flamboyant performer.

Tiny Tim's mispronunciation of "Illinois" was priceless. A spirited and appreciative club crowd is audible on this 1995 release. Tiny Tim fans enjoyed themselves immensely as their peculiar hero performed in his classic falsetto fashion.

He encouraged a round of applause for the fabulous New Duncan Imperials, and warmly introduced Mr. Skipper on bass, Mr. Pigtail on guitar, Mr. Goodtime on drums, and Mr. Crispy on piano. Tiny Tim embodied a veteran vaudevillian lost in a time warp, crooning songs from the beginning of the last century.

Tiny Tim sang a honky tonked-up version of a country & western flavored "Your Cheating Heart". His rendition of his signature song, "Tip Toe Through The Tulips", was a joy captured live. The band segued into a comical verse of "Lollipop" before returning to another romp "Through the Tulips". He later reprised another abbreviated run "Through The Tulips".

His rockabilly versions of "Rock Around The Clock" and "Great Balls Of Fire" sounded just like authentic `50's rock'n roll should. Mr. Pigtail infused a metal-guitar solo in a burst of contemporary style. These rollicking versions are taylor-made for gyrating on the dance floor to a seasoned bar band

His second evening set ended with a ragtime rendition of "When The Saints Go Marching In". Tiny Tim walked off stage and left his Chicago audience clamoring for an unanswered encore. Curiously, a telephone message recording of Tiny Tim leaving voice mail to a band member is tacked onto the end of the disc as an unidentified attraction. 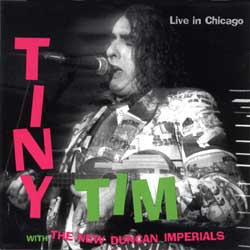 Live In Chicago: Are You Lonesome Tonight * When I Grow Old * Mother * Tennessee Waltz/Back In The Saddle * Your Cheating Heart * Tip Toe Through The Tulips/Lollipop * Rock Around The Clock * Tip Toe (reprise) * Highway To Hell * Great Balls Of Fire * I Believe * When The Saints Go Marching In