From the archives of the BBC comes The Kinks BBC Sessions 1964 - 1977, a mixed bag of musical artifacts of The Kinks from their prime during the height of Swinging London. The Kinks are British musical icons, but in 1964, they were an upstart quartet, striving to propel a number one single to the top of the British pop charts.

On the basis of the success of "You Really Got Me" capturing that coveted top spot, The Kinks were excused from having to pass a BBC Radio panel audition. Vocalist/guitarist Ray Davies, lead guitarist Dave Davies, drummer Mick Avory, and bassist Pete Quaife are occasionally joined by vocalist Rasa Davies and session pianist Nicky Hopkins. John Dalton took over bass guitar chores in 1968.

Released in March 2001, this double disc presents lost material performed by The Kinks, spotlighting some rare numbers that are outstanding blasts of the past, preserved by BBC Radio engineers. Kinks Kultists will find something among the many historic recordings to rave about.

The Kinks powerhouse classic, "You Really Got Me", retains its musical impact 38 years after topping the charts. Dave laid down a scratchier lead guitar solo on this BBC version. BBC Saturday Club emcee Brian Matthew asked, "What do you call your music, R&B?". Ray replied, "It's expression .... we express ourselves"; an exchange taken from their first BBC visit of September 1964.

Avory's drumming is perfect in the `60's pop rock ballad, "Tired Of Waiting For You". "This Strange Effect" is a Davies/Berry collaboration, performed only once by the band exclusively for the BBC audience. This 1965 composition was a monster hit for Dave Berry on the Euro continent. "Waterloo Sunset" was resurrected for a 1968 version, featuring a prominent piano passage from Hopkins.

A premiere performance of "Monica" prior to its actual vinyl release in 1968, exhibits the true versatility of the lads from Muswell Hill. Two fantastic live performances from July 1974 at the Hippodrome Theatre are enhanced by a horn section and female backup singers on "Victoria" which has a searing solo from Dave and "Celluloid Heroes", both captured for posterity in this excellent collection.

Six contributions showcase Brother Dave. "Wonder Where My Baby Is Tonight" is a bouncy 1965 rocker. His first A-side, "Death Of A Clown", is taylormade for an English pub singalong. B-side "Love Me 'Til The Sunshines" received a BBC workout with a definitive bassline from Quaife. "Good Luck Charm" is a short, jaunty cover, featuring Dave on guitar accompanied by Hopkins on the keys. The rough sound of "Mindless Child Of Motherhood" began a new direction for the group on stage.

The Kinks creativity flourished throughout the 1960s. While other British bands were creating formula rock music, The Kinks were recording rock opera concepts and performing live rock theater. Some of these musical experiments survive from mid `70's BBC Radio broadcasts. Enjoying a massive resurgence in the late 1970s, The Kinks cranked out quality material until their last studio effort in 1993.

2003 welcomes the 40th anniversary of The Kinks; sadly the group has not performed live since 1996. The band remains under contract to produce an album so hopefully, the Brothers Davies will find the common ground necessary to create new Kinks music in a new century.

Disc 1: You Really Got Me * Cadillac * All Day And All Of The Night * Tired Of Waiting For You * Ev'rbody's Gonna Be Happy * See My Friend * This Strange Effect * Milk Cow Blues * Wonder Where My Baby Is Tonight * Till The End Of The Day * Where Have All The Good Times Gone? * Death Of A Clown * Love Me 'Til The Sunshines * Harry Rag * Good Luck Charm * Waterloo Sunset * Monica * Days * The Village Green Preservation Society

Disc 2: Mindless Child Of Motherhood * Holiday * Demolition * Victoria * Here Comes Yet Another Day * Money Talks * Mirror Of Love * Celluloid Heroes * Skin And Bone/Dry Bones * Get Back In Line * Did You See His Name * When I Turn Off The Living Room Lights * Skin And Bone * Money Talks 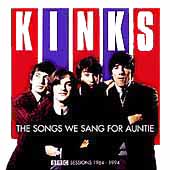