Ahoy Beatlemaniacs! Ringo Starr is phenomenal on this live recording. Ringo's vocals here are truly his best. Musical director Mark Hudson has transformed Ringo from his normally relaxed vocal style to an ex-Beatle delivering a stellar performance. Taped before a live audience by VH1 at the Bottom Line in New York City for their Storytellers series, this all-Ringo concert was so popular a decision was made to release it on disc.

VH1 Storytellers, from October 1998, features among The Roundheads Eagles guitarist Joe Walsh, Bad Company drummer Simon Kirk, and Mark Hudson on guitar. The little vignettes Ringo shares to embellish the background on some of the songs actually enhances the impact of this live album.

The song that opens and closes VH1 Storytellers is, of course, a Beatle number. "With A Little Help From My Friends" is Ringo's signature song from 1967's classic Sgt. Pepper album. The opening song is a musical metaphor as he always has major musicians with him when he performs on stage before an audience, a capital crowd pleaser. A 'reprise version' closes the disc.

Ringo's original compositions are outstanding highlights on this disc. His two Beatles contributions, "Don't Pass Me By" and "Octopus's Garden", are absolute treats to hear live for the first time ever. Ringo does a hilarious impersonation of the late Peter Sellers when relating the story behind "Octopus's Garden". His pronunciation of octopus is priceless.

Ringo's 1970's singles "It Don't Come Easy", "Back Off Boogaloo" and "Photograph" are performed to perfection as they were originally recorded in the studio. The origin of "Back Off Boogaloo" is quite an amusing tale with Ringo succeeding in capturing the melody onto a child's tape recorder. These five songs confirm Ringo's ability to compose quality material.

The newer Vertical Man selections are also tight performances. "I Was Walkin", "King Of Broken Hearts", "La De Da", and "What In The ... World" are all well received by the live audience. Ringo had a hand as a joint composer on all of these tunes from his June 1998 studio release. Ringo's vocals match the musicianship muscle supporting him on stage.

Singing "Love Me Do" 36 years later is a logical move to bring his career full circle. Ringo has never sounded better. The up tempo arrangement packs a punch the original Beatles studio recording lacked. In fact, if this live document is any indication, Ringo is 'getting better all the time'! Ringo should have taken The Roundheads out on the road in 1999.

Ringo's career has really benefited from The Beatles Anthology trilogy series, releasing two studio albums back to back in 1998 and 1999. And to date, Ringo is the only Beatle to ever perform in Russia. It is also worth mentioning Ringo's determination to tour after the attack on George Harrison in 1999. Sadly, the Quiet Beatle has since passed on November 29, 2001. 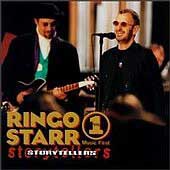